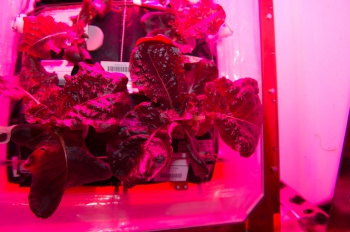 Astronauts aboard the International Space Station are preparing to reap the fruits of their labor on Monday, when they will chow down on the first food grown entirely in space.

Monday, August 10th, 2015 is a date marked on every astronaut's calendar: so long, freeze-dried burger patties; adios, powdered orange juice. For the first time in space-faring history, the crew aboard the ISS will be eating fresh greens, right from the garden.

It goes without saying, the in-flight peanuts are going right out the window.

The first harvest the crew gets to sample actually isn't a "green," per se - it's a variety of red romaine lettuce the pun-happy NASA scientists have named "outREDgeous." Ouch.

Thanks to NASA's plant-growing experiment named Veg-01, or Veggie, leafy greens have finally been successfully cultivated in low Earth orbit, after decades of attempts. Growing food in zero gravity is fraught with problems - you can't rely on water dropping into the soil, let alone that same soil not floating up and away. Without up or down, roots grow in a tangled, chaotic mess, and flowers have a hard time finding the sun from a porthole on the space station.

That's where the "pillows" come in, which you can see in the video and gallery below. Tightly packed with soil, nutrients, and the important seeds, the comfy-looking packages are placed in the collapsible Veg-01 container. There, the fledgling plants are bombarded with red and blue "sunlight" as they grow; stakes in the "pillows" guide the roots into the soil, act as a wick for water moisture, and prompt the shoots to grow "upwards."

The ultimate aim here is to make food-growing feasible in space - it is relatively easy to send food up to the ISS, when you are comparing it to long-distance, "someday" targets like Mars. In the gallery below are some of NASA's artists' renderings of what the Veggie system could look like on the red planet.

This sounds like enough reason to crack open a bottle of space-aged whisky...