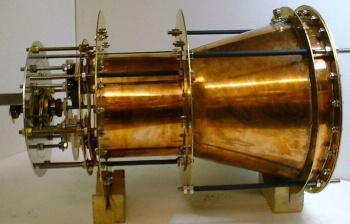 We here at The Escapist are pretty excited about the futuristic EmDrive, even though nobody has a clue how the thing works. In case you missed our previous coverage, the EmDrive is a fuel-less spacecraft propulsion engine that pushes microwaves into a truncated cone to generate thrust. But it's also generated intense controversy, mostly because reaction-less thrust is considered impossible under our modern understanding of physics. All the same, experts continue to claim the EmDrive works as advertised - including Paul March, a NASA Eagleworks engineer who recently shared EmDrive test information on the NASA Spaceflight forums.

The post is filled with technical science-speak (this is literally rocket science), so here's the layman version: One valid EmDrive criticism was that stray magnetic fields might have created the appearance of thrust in error. According to March, NASA's latest round of tests accounted for that by adding a new magnetic damper to the EmDrive. While March can't share the actual data - which is regulated under NASA's press release rules - he could say the EmDrive continued to generate "anomalous thrust" in the new tests.

"I wish I could show you all the pictures I've taken on how we saluted and mitigated the issues raised by our EW Lab's Blue-Ribbon PhD panel and now Potomac-Neuron's paper," March wrote. "However since I still can't show you this supporting data until the EW Lab gets our next peer-reviewed lab paper published, I will tell you that we first built and installed a 2nd generation, closed face magnetic damper that reduced the stray magnetic fields in the vacuum chamber by at least an order of magnitude and any Lorentz force interactions it could produce."

There is still one matter to account for: Despite largely ruling out Lorentz forces, a thermal expansion contamination exists which actually gets worse in a vacuum. That's a problem if we hope to use the EmDrive for space travel, so NASA is developing an advanced analytics tool and an integrated test to address the error. But all the same, NASA engineers speaking favorably about the EmDrive is highly promising for its prospects.

Now if only we could get that peer-reviewed data...