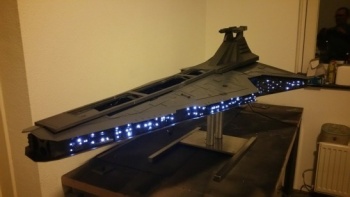 Few gaming PCs will ever be as imposing as this custom Star Destroyer build from modder Sander van der Velden.

Suppose you're in the market for a gaming PC, but not just any old build. You want something that celebrates Star Wars, looks as powerful as it runs, and terrifies your Rebel-sympathizing friends. Well, modder Sander van der Velden has something for you: The YAZI, a PC case which doubles as a massive Venator Class Star Destroyer replica. Designed as an entry for MSI's PRO MOD Season 3 contest, the YAZI looks so stunning that MSI will actually showcase it at CES 2016 next month.

As you can see from photos, this Star Destroyer case looks great while still being functional. The PC hardware is positioned to function as the YAZI's "engines", which are covered by the Venator's removable towers. The frame itself was assembled from aluminum cutouts, while everything else was generated with a 3D printer.

All told, it makes for an insanely impressive custom PC case which took a significant amount of work to produce. (You can see the full build log here for more details and photos.) But Sander isn't finished - he's told Escapist that he plans to auction the build at CES, using the funds to design an even more detailed YAZI Mark 2. And that's just one example of the modding projects available for commission on his website.

I assume the only reason he hasn't build a Death Star yet is because he's cautious about exhaust port placements.