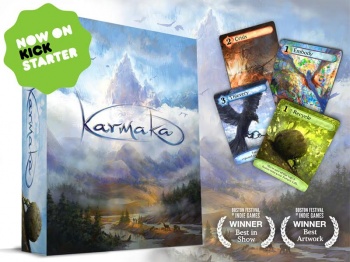 In Hemisphere Games' Karmaka, players draft and play cards to achieve transcendence (or ensure their rivals never do).

The core philosophy of Hemisphere Games' Karmaka is, "what goes around comes around." It only makes sense, then, that the game is being crowd-funded on Kickstarter, and is garnering quite the following.

What is first striking about this game is the jaw-dropping art; Marco Bucci is the artist, and he's worked on everything from Monkey Island, to Frozen, to Star Wars.

Once you get past the visuals, the game seems to offer a great deal of depth under its deceptively simple surface. In Karmaka, players are racing to achieve the highest level of transcendence, speeding through reincarnations as dung beetles, to serpents, to wolves, in order to get there first.

The game is played in "lives," and players take turns either playing cards from their hand as "deeds," which simply grants points towards moving up another rung of the ladder; using a card's ability in order to advance their own plans or thwart their rivals'; or they add a card to their "future life." Once a player has no more cards in hand, they have died, their points are added up, and if they pass the threshold, they get to move another step in the race. At this point, they gather up the cards set aside for their "future life" as their new hand of cards, and begin again.

One of the ways Karmaka's unique theme blends with its mechanics is this: when you play a card that targets one of your opponents - for example, red cards destroy what they've built, or blue cards steal their deeds out from under them - that opponent may choose to add that card to their "future life" deck. You might be seeing that card again, this time aimed in your direction - what goes around comes around, after all.

The game is meant to be completely self-contained. No expansions are planned, and the stretch goals all go towards improving the quality of the game's components. On top of that, Hemisphere Games (you might recognize them from the indie hit, Osmos) is offering a money-back guarantee to anyone who isn't satisfied once they've gotten their hands on the game; of course, you can try out the print-and-play version for yourself before pledging.

Any Escapists backing this intriguing game? I, for one, am always happy to see a new theme enter the sometimes stagnant board game arena, and I hope Karmaka fulfils its promise! The game and its creators also raise an interesting enigma - if video game developers are good in one life, are they reincarnated as board game makers in the next?