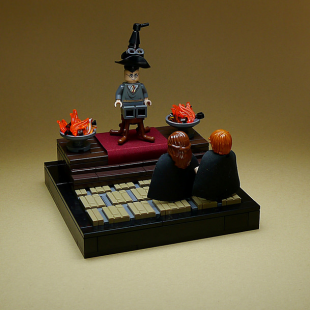 LEGO builder Marcel V. is working on a series of "vignettes" aimed at recreating all of the most famous moments from Harry Potter and The Philosopher's Stone.

When J.K. Rowling first wrote Harry Potter and the Philosopher's Stone, we'd be willing to bet that she had no idea just how big of a beast she was unleashing on the world of pop culture. In the years that followed, the franchise it created would become one of the biggest in entertainment, spawning an enormous consortium of fans who love the series to this day. As with most fan bases, Harry Potter and his wizarding world have inspired a ton of huge and complex tributes. Sometimes though, the most impressive fan projects are the ones that go small.

Take the LEGO "vignettes" of Flickr user Marcel V. Limiting himself to small-scale (14 stud by 14 stud) dioramas, he's currently recreating scenes from Harry Potter and the Philosopher's Stone and has already produced builds based on Harry's home on Privet Drive, Harry getting his wand at Ollivander's and, of course, the sequence with the Sorting Hat. "I've always been a big Potterfan, and I've wanted to do some builds to this theme for a while," said Marcel, speaking to The Escapist. Marcel would go on to share that the process of researching and building a scene usually "takes about 3-5 hours" and that he intends to release a build based on The Philospher's Stone on an almost daily basis throughout the month of March.

Usually, when we showcase something LEGO, it's often at least partially because of its enormous scale. What's most impressive about Marcel's work is how much he's able to do with less. Looking through the images he's posted so far, you'd be hard-pressed to find a single vignette that isn't almost immediately recognizable. While it will obviously be a ton of work, we're hoping he continues all the way through the series so we can see what he does with the rest of our favorite moments.