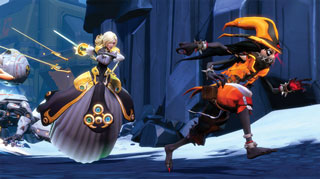 Gearbox has announced that they are bringing a premium currency to Battleborn. Called "Platinum," the new currency will allow players to buy specific items in the in-game marketplace. Initially, these items will be skins for all 26 heroes and taunts for Ghalt, Oscar Mike, Benedict, Shayne & Aurox, El Dragon, Whiskey Foxtrot, Kleese, and Alani. Gearbox says that these items "will not affect gameplay at all." The game's DLC packs will also be available through the in-game marketplace.

This shouldn't come as a surprise to those who were following Battleborn prior to launch, as Gearbox laid out their plans to add these items back in March.

Skins will cost 420 Platinum, with taunts coming in a little cheaper at 230 Platinum. How much will Platinum cost? Here's the chart:

Of course, there's also a mention in the blog post of the possibility of new content. The company says that it is "exploring convenient ways players can add bank spaces, loadouts, or boost their XP and credit earnings that do not affect actual gameplay."

The first free hero was added to Battleborn back in May.

You can see some examples of the new skins on the Battleborn website.