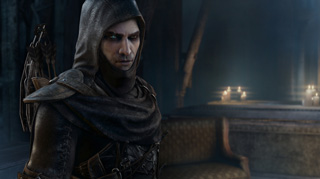 The production company working on the Thief film adaptation may have let the cat out of the bag on a new game in the series.

Square Enix may be looking to sell off Hitman developer IO Interactive, but it isn't ready to give up on the Thief franchise yet. At least that's what a listing on a film production company's site would have us believe. Straight Up Films has a listing page for the Thief movie that was announced last year, and on that page you can find this tidbit:

"The Thief series has spanned over fifteen years and four sequels continually retaining loyal audiences and attracting new fans with each iteration. Widely considered to be one of the greatest games ever created, a fifth sequel is currently in development to be released in step with this motion picture adaptation."

If this listing is accurate, it would mean that despite the somewhat lackluster performance of the Thief reboot in 2014, Square hasn't given up on it yet. Of course, it would make sense from a business standpoint to have a game come out alongside the movie, so maybe that's behind the plan.

Of course, there's no word on when the movie might release (it was announced in March of 2016), but if it's going to be coming in the near future, we'll likely hear something about the game at E3 next month.