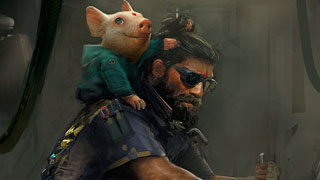 You may not see Beyond Good & Evil 2 at E3 , but you should hear something about before the year is out.

Beyond Good & Evil 2 has been in the works since it was greenlit all the way back in 2008. It disappeared for a while, but was confirmed as "still alive" in 2012. Although the game is still in the works, you won't get to see it at E3 this year, either. However, you may hear more before the end of the year.

That news comes from creator Michel Ancel's Instagram, where he confirmed that the game wouldn't make an appearance at E3 next month. "Not sure that E3 would be the best place to showcase Bg&e2," he wrote. But he did offer some hope that we would hear more about the sequel in the coming months, saying, "But we're working on the game so sometime this year, you should hear about it!"

We've been waiting for more news on BG&E2 since Ubi confirmed that it was real last October, and although this isn't the full-on reveal we were hoping for, it does offer up some hope that we could see the game this year.