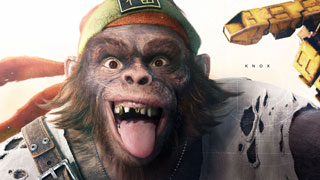 We saw Beyond Good & Evil 2 at E3 this year, but it could be a long time before we actually get to play it.

After hearing that Beyond Good & Evil 2 wasn't making it to E3 this year, most gamers were understandably surprised when Ubisoft closed out its press conference by showing off a cinematic for the game. While the cinematic looked cool, it seemed to be a big change from the tone of the original game, and there was no gameplay footage to show us how it would actually play. It runs out there's a good reason for that, as series creator Michel Ancel says that BG&E2 is still at "day zero of development."

The statement was made in an interview with The Verge, which featured Ancel saying that, "There's still a lot of work to do, but we now really believe that we're going to make this game."

The team started working on the game three years ago, but before the game could begin, it had to build the tech to support it. After creating what would be best described as a solar simulation tool, work on the game recently began.

"When you don't have this technology, you can't really start the game," Ancel explained. "It's too difficult. But now we can say for sure that we will make this game, we'll finish it. Because we have the technology for it." He said that the game is currently in "day zero of development."

If you read the whole interview, you'll see that even Ancel isn't exactly sure what Beyond Good & Evil 2 will ultimately turn out to be, and that sort of uncertainty means that an actual playable version of this game could still be years away.