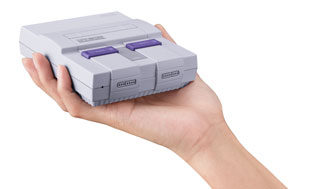 You may have a better chance of getting your hands on the SNES Classic Edition, as Nintendo says it is making "Significantly More" units this time around.

Earlier today, Nintendo announced that it would be producing the SNES Classic Edition, a throwback console that packs in 21 classic SNES titles. But just as the entire internet was getting excited about that announcement, it was also remembering the stock issues that plagued the NES Classic before it was finally discontinued in April. Nintendo is hoping to avoid similar shortages this time around, as it has told Polygon that it plans to produce "significantly more" units of the SNES Classic than it did the NES Classic.

In a statement, Nintendo said, "We aren't providing specific numbers, but we will produce significantly more units of Super NES Classic Edition than we did of NES Classic Edition." Unfortunately, it may not continue the production run very long. In the same statement, the company said, that it plans to continue production of the SNES Classic "from Sept. 29 until the end of calendar year 2017." While that doesn't mean that Nintendo couldn't make more consoles past that point, it did say that, "At this time, we have nothing to announce regarding any possible shipments beyond this year."

The SNES Classic Edition launches on September 29. It doesn't appear to be on Amazon in the US just yet, but you can bet that it will be a hot commodity once it becomes available.