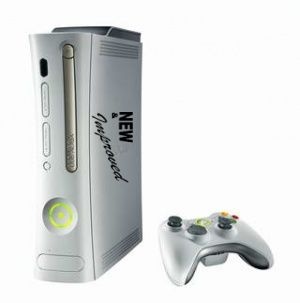 Insiders at Toshiba have reported that Microsoft is working on a brand new Xbox with a new HD DVD drive, larger hard drive, new entertainment software and other features.

The new device, while still functioning as a game console, is intended to serve as an "entertainment hub," with 1080p video playback and wireless networking capability. Other possibilities for the system include a dual HDTV tuner, EPG (electronic program guide) capability and an MP3 player docking port. The design is reportedly in response to recent surveys which show that in several countries, Sony's competing PlayStation 3 console is selling primarily because it includes a Blu-ray player.

"An Xbox with a built-in HD DVD is critical," a Toshiba executive said to technology website SmartHouse. "It also has to be more than a gaming machine. Microsoft recognizes this. A version of the device may also be sold under the Toshiba brand name." Toshiba owns the patent to HD DVD.

"The PS3 has been extremely successful for Sony in getting Blu-ray off the ground and for Microsoft, the omission of a built-in HD DVD player is set to hurt sales going forward as consumers are aware that the PS3 comes with a Blu-ray player," added JB HiFi Marketing Director Scott Browing.

Toshiba is also reported to be working with Microsoft to reduce heat and noise output from current levels in order to keep the device silent during movie playback, and to reduce hardware failure rates. The new device is expected to be unveiled in late 2008 or in 2009 at the Las Vegas CES.