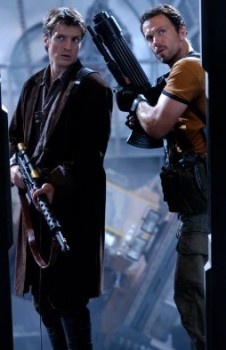 Bad news for gamers hoping to find some Serenity of their own: The Firefly MMOG has been delayed.

The news follows the announcement of an upcoming MMOG based on Buffy the Vampire Slayer, Firefly creator Joss Whedon's other, more popular, property. Game Daily News speculates that Whedon and Fox have focused their efforts on the more lucrative Buffy franchise, resulting in the Firefly delay.

The new Buffy MMOG will allow players to experience the game world as either a "fully immersive 3-D environment or as a Flash-based 2-D game," with interaction between players in both modes. The game will be launched as part of Multiverse Places, described by MMOG platform developer Multiverse as a "new social virtual world."

"As a brilliant storyteller and world-maker, Joss Whedon crafts stories that expand perfectly into the new medium of virtual worlds," said Multiverse co-founder Corey Bridges. "Not to give away too much, but when the Buffy team finished the television series, they created the perfect launching point for an MMOG where everyone will feel like they're an important character in the ongoing story."

Fox says the Firefly MMOG is still in the works, so fans shouldn't give up hope just yet, but the property's failure as a television show and movie is a big liability. Presenting the 'verse in a manner that would satisfy fans of the franchise is also a very dicey proposition - you can't all be Mal or Jayne, kids - and questions about the long-term viability of the game are very valid. Serenity ended the Firefly series on a satisfying, if not entirely happy, note; perhaps it would be best to just leave it at that.