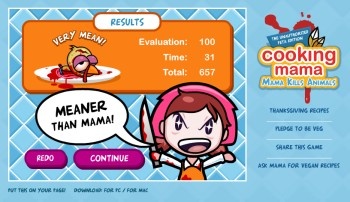 People for the Ethical Treatment of Animals are celebrating Thanksgiving this year by treating us to their own special Flash-based edition of Cooking Mama, called Mama Kills Animals.

The Thanksgiving holiday in the U.S. is celebrated on the fourth Thursday in November, culminating in a massive, gut-busting, pants-splitting turkey feast. Predictably, PETA has a few issues with the carnivorous aspects of the holiday, and has decided to take advantage of Flash technology and the internet to remind us that there's enough gazpacho for everyone. In Cooking Mama: Mama Kills Animals, players engage in a wide variety of simple mini-games as they prepare the turkey for the big meal, including plucking the feathers, ripping out the guts and hacking off the head.

Like all good games, Cooking Mama: Mama Kills Animals offers bonuses for advancing through the levels, and as befits a true PETA promotion, the very first bonus is a video that includes footage of turkeys crammed together in massive industrial farming operations, being clubbed to death, hung upside down and having their throats slit while they're still alive, all in a very vivid shade of abattoir red. Later bonuses are somewhat less graphic, including things like hi-res Mama Kills Animals wallpaper and a web banner for folks who support the cause.

I'm a pretty big fan of animals myself, and in a broad sense I support a lot of what PETA is trying to accomplish, but I have to admit that despite the grim subject matter this game is nothing short of hilarious. Ramming cartoon stuffing that looks more like a monstrous cat hairball into the gaping arse of a mutilated turkey is a singularly unique experience, and being screamed at by a frenzied, blood-drenched Cooking Mama for not being mean enough to the birds just never gets tired. Unfortunately for PETA, the moralizing does: The moment the game told me Cooking Mama had learned the error of her ways and instructed me to "mash the tofu," I quit.

Gallery of the Day: 8 Pictures To Get You Hungry For The Hunger Games DrStrangelove 11 Comments