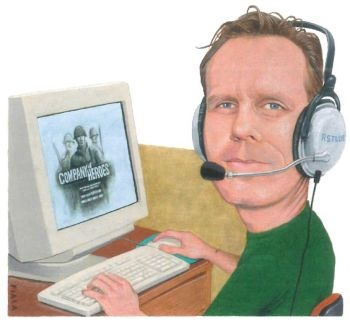 PC Gaming Alliance President Randy Stude recently spoke out about the future of gaming on the PC, how PCs and consoles may someday intersect and the fallacies of blaming all your problems on piracy.

In a new interview posted at GamePolitics, Stude made some interesting predictions about the future of gaming, not least of which is a crossover with consoles that will see future PCs include console compatibility. "The guts of every console should tell you that the capability is there for the PC to act as the central point for all the consoles," he said. "If you bought a PC and as part of that equation you said, Okay, when you're on the phone with Dell, "Hey, Dell, on this PC, this new notebook I'm buying, can you make sure it has the PlayStation 4 option built into it?"

"Why shouldn't that be the case? [Sony is] certainly not making any money on the hardware," he continued. "I mean, can't they create a stable enough environment to specify that if Dell's going to sell that notebook and say that it's PlayStation 4 [compatible] that it must have certain ingredients and it must meet certain criteria? Absolutely they could do that. Are they going to do it? I don't know. I predict that they will. I predict that all of the console makers over time will recognize that it's too expensive to develop the proprietary solution and recognize the value of collapsing back on the PC as a ubiquitous platform."

Stude also called the idea of publishers abandoning the PC platform because of piracy as "ridiculous," saying, "If someone wants to leave the PC market, we'll miss you. We'll watch with admiration as your titles ship in a diluted fashion without a whole lot of game play innovation, at least until you copy the innovation that occurs on the PC. Well find the great games on PC and we'll play those."

"I've heard people say, well, we're just not going to publish this title for PC gaming because it's in a state of disarray or because of piracy or whatever," he added. "Okay, fine. Do what you want. If you're not going to release the Tom Clancy EndWar game for PC day and date, when you do release it for PC don't be surprised if everyone's bought a different game instead. They all bought C&C Red Alert 3 instead of EndWar. You blew it."

He admitted that the complexities of the "PC ecosystem" sometimes make it difficult for console developers to properly port their games to the PC, and said that one of the goals of the PCGA is to establish a "minimum starting point" for PC gaming. "We want the hardware OEMs and the game publishers to support that guideline and to advocate the experience of gaming on the PC at a stable starting point, something will last a couple years and then move on to the next [standard]," he said. He also noted that the PCGA is discussing a logo for gaming-ready PCs, saying, "If there needs to be a logo then we'll probably have a logo, but we haven't made that determination yet."

GamePolitics' full interview with Randy Stude, touching on other topics including the impact of Windows Vista on gaming and the effort to push PC gamers to consoles, can be read here.