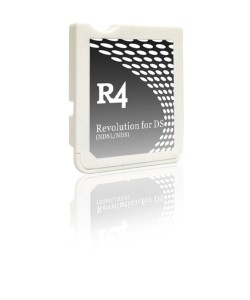 The Tokyo District Court has issued a ruling making sales of the R4 card, a device that enables the DS to play homebrew and pirated games, illegal.

Last year Nintendo and 54 other companies filed a lawsuit against the manufacturers of the R4 Revolution card that allows the DS to play illegally downloaded games as well as homebrew software. Claiming that the products caused "severe damage to our company and software makers," Nintendo sought the halting of importation, marketing and sales of the device in Japan.

Today, the Tokyo District Court ruled in their favor, making illegal all R4-related business in Japan. Nintendo, Square Enix and Capcom have already backed the ruling, declaring that the R4 is now in "violation under Japan's laws." Live in Japan? You can't sell an R4, can't buy an R4, can't put up an R4 poster in your window. If you say the word "R4" while outside after 8 PM, don't be surprised to find yourself unconscious in the back of an armored police van soon afterward.

The ruling, interestingly, does not apply to any of the other similar brands of cards, just the R4. Nintendo and its allies have, however, already said that they will be pursuing litigation against other manufacturers in the time to come.

How will this ruling affect the R4 in other territories? Who knows. Currently it's illegal to sell an R4 in the UK, but a-okay to buy one. In America you can readily get one, either online or from some shady dude in Chinatown, and, according to some analysts, 90 percent of American DS owners play pirated DS games via the R4 or similar devices. If Western governments want to follow the precedent of Japan, that number might be falling soon enough.

Casual Gamers Are Better Than You Jim Sterling 189 Comments