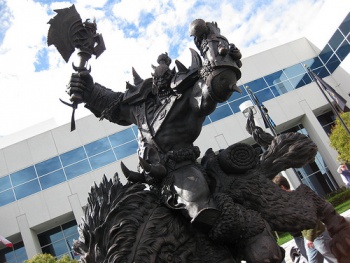 What do you do when you're a game developer that's richer than Croesus? If you're Blizzard, apparently you build a 12-foot bronze statue of an Orc riding a wolf outside your brand-new HQ.

Back in October, I had the opportunity to visit the Blizzard campus as part of the Blizzcon '08 Fansite Community Summit. When we were being given the tour around the brand new office complex by Diablo III Community Manager Bashiok, he paused by a large empty square in front of the main building. "Yeah, so this is where we're going to be putting the giant bronze statue of the Orc riding a wolf," he said with a grin.

As it turns out? He wasn't kidding. To celebrate the move to their new studios, Blizzard gave its employees small statuettes of one of their Warcraft Orcs riding into battle on the back of a wolf mount as their 2007-2008 holiday gift - but that wasn't good enough for the campus itself, of course. At the end of February, Blizzard officially unveiled the real thing. As promised, it's an Orc riding a wolf, made out of bronze, standing 12 feet high. It's also totally awesome.

The statue was made by New Zealand-based WETA, best known for their work on Peter Jackson's Lord of the Rings film trilogy. It certainly makes sense: If you're going to turn something fantastic into something real, why not go with people who already have that sort of experience? Plus, WETA is no stranger to bringing Orcs to life - they probably have a catalog. Still, we here at Escapist HQ can't help but think it'd be funnier if it were just a random sculptor who got commissioned to build the thing: "Wait, you want me to build a what, now?"

It's difficult to imagine where Blizzard could go next after this: How do you top a giant 12-foot bronze Orc? Other than a theme park, of course.

Reports that top European guilds - impatient for the new Ulduar instance - are planning on raiding the statue for phat epic lewtz have yet to be confirmed.