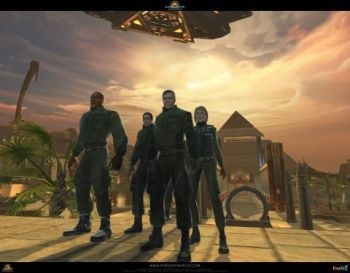 Stargate Worlds developer Cheyenne Mountain has been slapped with a lawsuit over unpaid bills, another piece of bad news for the troubled MMOG.

The company has been sued by Arizona-based data center IO Capital Princess LLC for an "unpaid open account," according to azcentral.com. Dollar amounts aren't listed but anything more than whatever's in the coffee fund will be bad news for Cheyenne, which revealed near the end of 2008 that it was running out of money and was seeking "additional sources of funding."

"We have always been upfront with the media and our fans that we are a start-up," Cheyenne's Kevin Balentine said at the time. "Like many start ups, we face the same cash-flow issues that all pre-revenue companies face." Unlike many start-ups, however, Stargate Worlds doesn't have the backing of a deep-pocketed publisher who can afford to keep development rolling until the game is released.

At one point last year Cheyenne couldn't even pay its own employees, a situation reflected in the grimly humorous site "days-since-cheyenne-mountain-employees-have-been-paid.com" which kept a running total of how long employees at the company had gone without money. The site is currently up to 124 days, although whether it's actually been three months since they've been paid or the site has just been forgotten is unclear.