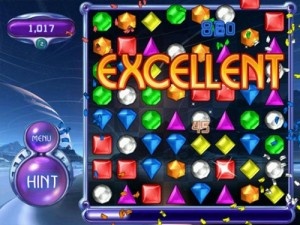 Drop that bag of Cheetos and get to Peggling! A study conducted by PopCap UK seems to suggest that casual gaming can be an effective weight loss tool.

Conducted over the course of this January, the study showed that casual gaming can provide the distraction necessary for avoiding giving into the bad urge to stuff your face with saturated fat filled snack foods. Though only 10 out of 30 of the participants (who the heck is too lazy to play Peggle for a month) completed the survey, those who did showed some huge success rates.

"While trial results were scientifically inconclusive due to a low number of participants completing the month-long programme, there were some interesting findings," dietician Nigel Denby, who ran the study, said. "For those who finished the trial, we saw that on all occasions Bejeweled Twist was used, it prevented eating due to a craving, with participants reporting forgetting about their cravings whilst playing the game."

Denby also found that playing games generated good moods, which is a key element in triggering bad eating habits. Stress, anger and sadness often lead to overeating, so all the happy generated by Extreme Fevers in Peggle may very well keep you from munching on Doritos so you can't hear yourself cry.

Some participants showed exceptional results. "My cravings have noticeably reduced since I started this trial and I lost 7 lbs over 4 weeks," Debbie Hodgson, who never played a computer game before the study, said.

Gaming also helps curb smoking, the study showed, as, in addition to the distraction from playing, having your hands occupied with pointing and clicking means that they can't be used to light up and puff on a cigarette.

For Science!: This Is Why Your New Year's Resolution Will Fail Rhykker 10 Comments