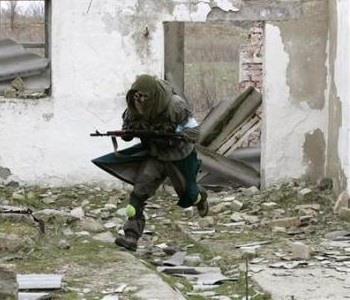 Remember those crazy Russians who dressed up in combat gear and headed out to Chernobyl to play some real-life S.T.A.L.K.E.R.? They're back!

Anyone familiar with Russian videogames knows there are a couple things that set them apart from their American counterparts: They're about as polished as 80-grade sandpaper and they're bitch-ass hard. That uniquely Russian style appears to extend to their live-action gaming habits as well: LARPers in the U.S. dress up like cartoon characters and go to conventions; in Russia, they dress up in full combat gear, dig up armored personnel carriers and go to frikkin' Chernobyl.

They first appeared in a series of photographs, many quite stunning, that popped up in May 2008. Several dozen die-hard gamers dressed up as S.T.A.L.K.E.R.s, soldiers and mutants, and trekked out into the Ukrainian forest surrounding Chernobyl, site of the world's most infamous nuclear accident and setting for one of its coolest FPSes. Once there, they went to work recreating the game's eerie environment, with smoke grenades, tents, bunkers and even supply caches and anomalies.

Apparently they had such a good time that they decided to go back for more. It's impossible to tell if it's actually the same group of fans at work but Reuters (via Kotaku) has a new series of live-action S.T.A.L.K.E.R. photographs, these taken near the village of Sengileyevskoe in Russia's southern Stavropol region. This latest session may lack the irradiated authenticity of Chernobyl but it looks fantastic - and there are knife fights!

The Needles: The Russians Are Coming! Andy Chalk 32 Comments

Let the Right One In and Play Videogames! tendo82 15 Comments

Gallery of the Day: 8 Nuclear Monsters That Want To Eat Your Face WMDogma 4 Comments