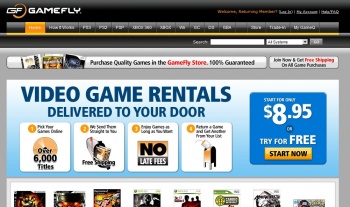 Have you ever had a Netflix, Blockbuster or GameFly disc arrive at your doorstep snapped in half? It doesn't happen often, but it does happen. That's just how these things go. All three companies have done their best to prevent the problem, but, according to a complaint filed by GameFly, the USPS won't let GameFly do as much as they can.

"GameFly is not the only mailer to experience significant DVD breakage rates on automated mail processing equipment," the complain states. "In response...the Postal Service has adopted a practice of manually culling out the DVD mailers of two high-volume shippers of DVDs, Netflix and Blockbuster, for special processing."

However, the Postal Service denied GameFly's request to receive the same kind of manual processing for its DVDs that Netflix and Blockbuster receive. That doesn't mean much regarding Netflix, as they don't rent games and aren't GameFly competitors. Blockbuster, on the other hand, is rolling out a game rental service through its Total Access service.

"Because of the preferential treatment given by the Postal Service, [Blockbuster] enjoys a substantial cost advantage in the distribution of its DVDs," GameFly stated.

GameFly explained that they have tried a number of ineffective solutions to the disc breaking problem, and have incurred higher costs from the USPS as a result.

General problems with the USPS aside, if I were GameFly I wouldn't be spending money on lawsuits to get a leg up on Blockbuster. Judging from what we've heard about that company's current financial situation, I wouldn't expect them to remain a competitor for too much longer.

Movies and TV: Netflix and the Cultural Capital of Air Dates heWizard 17 Comments

The Big Picture: Legend of Many MovieBob 88 Comments

Gallery of the Day: 8 Batman Villains That Could Use The Attention DrStrangelove 34 Comments

The Secrets Hidden in Netflix Aaron Williams 0 Comments
Comments on