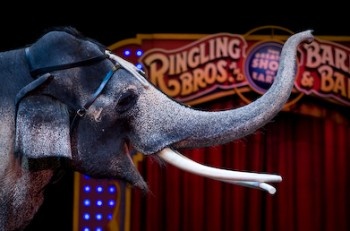 People for the Ethical Treatment of Animals is at it again: The group has launched a campaign against a planned series of Ringling Bros. themed circus games to be published by Take-Two Interactive.

Announced in April, the games will be developed for the Nintendo Wii and DS and published by Take-Two label 2K Play. "These upcoming games add an entirely new interactive dimension to the Ringling Bros. and Barnum & Bailey experience," said Ringling Bros. Producer Nicole Feld. "Now circus fans of all ages can continue to experience the thrills and excitement of Ringling Bros. when they play these new games at home."

But that doesn't sit well with PETA, which has serious issues with circuses in general and Ringling Bros. in particular. PETA says it contacted Take-Two with information about the Ringling Bros.' long history of animal abuse including undercover video footage, but since that warning was ignored it's now asking concerned animal lovers everywhere to send a message to Take-Two CEO Ben Feder protesting the game's development.

"I was shocked to hear that Take-Two is partnering with Ringling Bros. to create a circus-themed video game," PETA's pre-generated message says. "Video games might be a fun way to pass the time, but circuses are no fun for animals. Ringling has a long history of animal abuse and neglect. To get elephants to 'perform,' Ringling Bros. rips babies away from their mothers and stuffs them into poorly ventilated boxcars, forcing them to travel and perform for up to 50 weeks out of every year. Elephants are beaten and gouged in the most sensitive parts of their bodies with metal-tipped bullhooks."

I've always been a bit dubious toward the treatment of animals in circuses but as usual, PETA's overarching radicalism and, let's be honest about it, craziness makes it impossible for me to really get behind this effort. The group's concerns about animal welfare in circus environments are legitimate; its methods of addressing those concerns, unfortunately, are not.

The Take-Two/Ringling Bros. protest is available here and if you're in the mood to spoil your day completely you can also check out some doubtlessly horrific stories, images and videos from real-life circuses at PETA's circuses.com protest site. As for me, I'm looking forward to a parody protest game; after all the fun I had beating the crap out of a turkey I can't wait for the chance to lay a whomping on a whole herd of elephants.

Gallery of the Day: 8 of the Best Games to Feature Aliens DrStrangelove 9 Comments