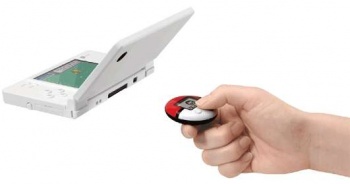 Speed-walkers and long-distance runners will have a leg up on training their Pokemon in the Gold/Silver remakes coming later this year, as Nintendo is producing a "PokeWalker" pedometer accessory that trains your Pokemon as you walk.

Some of us don't have the kind of free time that it takes to meticulously breed our Pokemon down to the most minute statistic. Some of us don't even have time to breed them period. How many times have I told myself "I'm going to make an entire team of EV-trained Psyducks" only to find that real life gets in the way?

Well, Nintendo has created something of a solution for those of us who need to do their Pokemon training on the go. Bundled with the Gold/Silver remakes due later this year, the PokeWalker is a pedometer shaped like a Pokeball that trains a Pokemon of your choice as you walk.

The way it works is you transfer a single Pokemon to the machine via infrared, then when you hold it as you walk, the PokeWalker will track your steps and dole out experience points as you go. Affection will also build up from the Pokemon selected, and the device also counts how many steps you took, which it'll then convert to "watts" which can be used to catch wild 'Mon and find items.

Useless peripheral designed to jack up the price on an expensive bundle? Or possibly a alever marketing ploy to attract fitness-friendly consumers or, better yet, a way for kids to convince their parents to buy them this game by saying "but look, it'll make me exercise!" Who knows? Expect Japanese public transportation revenues to drop when this comes out, though, as a result of the population's sudden desire to walk everywhere.