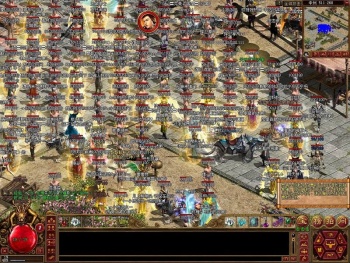 A remake of Hot-Blooded Legend, considered a classic videogame in China, was blockaded by disgruntled fans on its launch.

The Legend Returns is a remake of the classic Chinese videogame Hot-Blooded Legend, a classic Chinese MMO. The remake was billed as a having the 'flavor' of the original, but fans quickly discovered that that was not the case and microtransations seeemd to be the order of business.

Feeling slighted by what they described as publisher Shanda's 'false advertising', they organized an in-game protest and as the game went live at 2pm on August 28th, thousands of players blockaded the entrances to the game's various cities, preventing other players from entering.

The game admins quickly retaliated and transported charcters either to patches of wilderness far from the cities, or into what is called the 'Black Room'.

A Chinese blogger summed up the feelings of the protestors in a blog post: "...things are different in <The Legend Returns>. There are commercial stores in which you can buy anything that you want as long as you have RMB (the real currency of China). As long as you spend money, you can get promoted even if you don't fight the monsters and you can live a life of leisure."

"It is no wonder that the netizens are protesting: In a virtual world in which real-world money means everything and actual ability counts for nothing, what embodies the values of life?"

MovieBob - Intermission: Looking Back at This Summer's Movies MovieBob 45 Comments