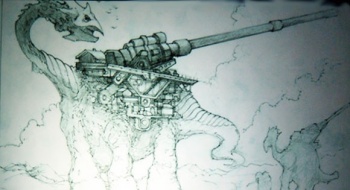 During their keynote at GDC Austin, Blizzard's J. Allen Brack and Frank Pearce talked about long-canceled sci-fi RPG Nomad, and revealed that despite its popularity and pricey tickets, BlizzCon is written off as a financial loss.

You may recall that tickets to this year's BlizzCon sold out rather quickly - 20,000 tickets gone in eight minutes at the very most - and at a pricey $125 per pop, simple math tells us that Blizzard raked in $2.5 million on tickets alone. Factor in the merchandising, and it's hard to imagine that BlizzCon is anything but a financial killing for the Irvine-based PC developer.

Hard to imagine, perhaps, but it's actually ... true? According to Joystiq, Blizzard's Frank Pearce revealed during his joint AGDC keynote with colleague J. Allen Brack that BlizzCon is operated "at a substantial loss for Blizzard." It's not all that hard to see why, either - beyond renting out the enormous Anaheim Convention Center, stages and sets need to be built, massive banks of computers need to be set up and run (and electricity doesn't come free), staff needs to be paid, et cetera.

So what do they get out of it? Well, other than helping to assure the loyalty of fans for the rest of their natural lives, it's an incredible PR/marketing blitz for the company. It's quite handy for Blizzard, to be sure - two days of straight news about their games unimpeded by the rabble that attends E3? Be still, their beating hearts.

The two briefly talked about - and showed some concept art of - Nomad, a game that was mentioned at last year's DICE as part of a long list of games that Blizzard had started work on and scrapped over the years for not living up to standards. Nomad was supposed to be a "squad-based sci-fi RPG" during development a decade ago, and although Blizzard had put a great deal of effort into the title, there came a moment when the developers asked themselves, "Is this really the game we want to be working on right now?"

The answer, as it turned out, was "No." Blizzard scrapped Nomad, and went on to kick work on a little game called WoW into high gear. In retrospect, that may have been the better idea. It's unlikely that this is related to the current "unannounced MMORPG" in development - it would be odd to see that game unveiled with so little fanfare - but it's an interesting look at what might have been.

Brack and Pearce mentioned quite a few numbers in their keynote, but here are three more bits of trivia: The Blizzard QA team has currently tracked 179,484 bugs in the game since its inception, there are 7,650 quests in the current state of WoW, and roughly half of the data in each new content patch is audio footage. Go figure.

This Is How We Do It: Your Heroes of the Storm Starter Guide to Ruling the Nexus Eric Brackett 2 Comments
Comments on