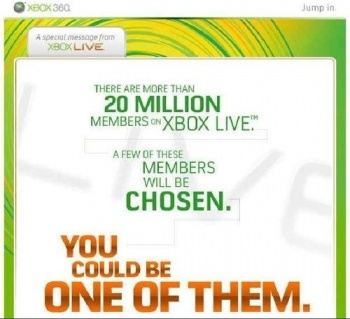 Want stuff? Microsoft might give it to you for using Xbox Live, but you've got to be special... really special.

Microsoft appears to be testing some kind of rewards program for Xbox Live users, as Kotaku uncovered. An email was sent out to various Live subscribers recently inviting them to participate in a limited-time rewards program. According to Kotaku, the email said:

This is an exclusive pilot rewards program. That means that the people who get in get stuff. Cool stuff. You want cool stuff, right? Sure you do, we all want stuff. Especially cool stuff. Well, you've only got until October 21, 2009 to let us know you want cool stuff, because after that, the doors close and someone else gets the cool stuff.

So, you click the button below and register to let us know you want in and pretty soon we'll let you know if you got in or not - and not everyone will (that's why it's called exclusive).

This offer is for a select few - you can't send it to anyone else (why would you send something this awesome to someone else, are you nuts?). If you make the cut, you can pass or opt-out whenever you want.

But then you'll never know how it ended.

It seems to be legit, though one Kotaku commenter posted that the only thing he got from replying to the email was a boring 5 question survey about the quality of Xbox Live, the Xbox 360, and the Xbox brand. So what the heck could this be? There has to be something in this for Microsoft somewhere, and if the survey is real it hints that Microsoft could be rewarding consumers for feedback, similar to how it and Sony reward retail employees of places like GameStop and Best Buy for completing surveys about, and therefore gaining knowledge to better sell, the company's products.

Whatever it is, I want stuff, and I want stuff now. I'm fully willing to quickly answer any kind of survey if it means I get stuff. If I get good stuff I may even answer it honestly.