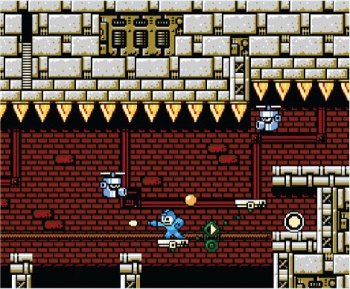 Mega Man is coming back for another go on WiiWare, in classic retro style yet again.

Mega Man 10 for Nintendo WiiWare has been revealed by a preview of the January 2010 issue of Nintendo Power. The game follows up on Capcom's experiment to take Mega Man back to his roots with Mega Man 9, which used a classic gameplay style along with 8-bit graphics and sound. It must have worked out for the company, because Mega Man 10 will follow the same design.

Everything will be retro yet again, with at least eight new bosses to defeat. The only boss revealed in the preview is the horrifying Sheep Man, who can turn into clouds and attack Mega Man from above with lightning. Other bosses may be hinted at by a couple of Mega Man 10's new stages, one being computer-themed with enemies shaped like mouse pointers (Microchip Man?), another a vertical ascent amidst fireball enemies and lava pools (Volcano Man?).

Playable from the get-go in Mega Man 10 will be your friendly neighborhood Mega Man, the sliding and shot-deflecting Proto Man, and a super secret third character that hasn't been unveiled yet. My money is on Bass, a Mega Man rival whose blueprints made a cameo in Mega Man 9.

Mega Man 10's story will involve a virus called Robotenza, which causes robots to go berserk. For more information we'll have to wait until the next issue of Nintendo Power comes out and the rest of the preview can be read. Until then, you can sharpen up your skills with Mega Man 9, currently available on WiiWare, XBLA, and PSN.

Pixels and Bits: Making the "Right" Choice in Paperboy and Beyond Lizzy Finnegan 47 Comments