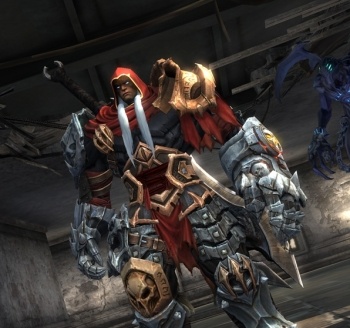 Signal Hill analyst Todd Greenwald thinks that Vigil Games' Darksiders may have been a poor way for THQ to ring in its new year.

Vigil Games' Darksiders rang in the new year with a roaring apocalyptic journey of kicking ass through heaven and hell as War, one of the Four Horsemen of the Apocalypse. Some reviewers thoroughly enjoyed it, others didn't, but the game managed a respectable 83 on Metacritic. Despite generally positive reviews, however, at least one analyst is predicting that Darksiders did not pass muster when it comes to publisher THQ's books.

Darksiders must have cost THQ a pretty penny, says Signal Hill's Todd Greenwald, and THQ may not be seeing quite the return on investment it's been hoping for. "Darksiders didn't perform up to THQ's expectations," laid out Greenwald, "likely selling less than 1 million units despite heavy marketing dollars, 2-3 years of development costs, and was also subject to discounting just 2 weeks after its release."

Overall, Greenwald expects THQ's Q1 earnings to be around $347 million come March. While I'm sure there isn't a single one of us who wouldn't love to have made $347m in revenue in a quarter of a year, it all depends on how much they spent in that year - and if Greenwald's predictions about Darksiders are true, then THQ's hopes at achieving profitability may have just been severely undermined.

Gallery of the Day: 8 Video Game Mounts You Love to Ride ffronw 15 Comments