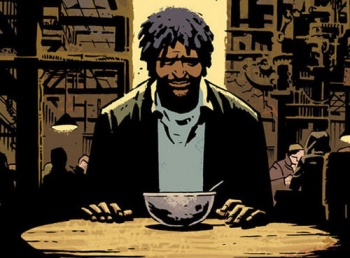 Shepherd Book, possibly the most mysterious character on Joss Whedon's ill-fated space-western Firefly is to star in in a comic book that will finally let us in on his past.

A character with a mysterious past is hardly a new idea for Joss Whedon, by Firefly's Shepherd Book was a particularly good one. Played by Ron Glass, the Shepherd - the term used for men of the cloth on the show - clearly had not been a God's servant all his life, and some pretty high-level connections with the Alliance. What made the mystery extra-potent however was that the show got cancelled, and we never got to find out what his mysterious past actually was.

All that is about to change though, as a new comic book, entitled The Shepherd's Tale, is coming out that will finally cast some light on the preacher's colorful life. The book is written by Zack Whedon, and based on a detailed scene-by-scene outline from brother Joss.

Zack Whedon said about the book: "You will see Book's full trajectory... How he became the man he was in the show and who he was previous to that. It takes you deep into his past. You really get to see the entire evolution of this man ... Book specifically is a great character to do the origin of because we know so little about it in the show, the little hints that we get are so enticing and his history is very... complicated. It's an intricate set of circumstances that created the man we meet in the show so that is very fun to explore."

The Shepherd's Tale comes out in November, as a hardcover graphic novel.