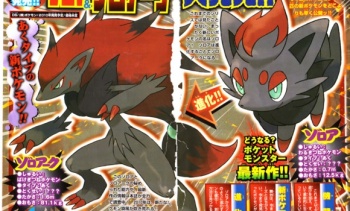 The fifth Pokémon generation is here: The DS will be looking at the world in shades of Black and White (versions) this fall. In Japan, anyway.

On Monday, we learned that the next generation of Pokémon games would be getting a "shock announcement" this Sunday. Well, it may not be Sunday - not even in Japan, where it's the future - but Nintendo has taken the veil off of the newest Pokémon games anyway ... sort of.

After three generations of being named after gems and minerals (Gold/Silver/Crystal, Ruby/Sapphire/Emerald, Pearl/Diamond/Platinum, for those keeping score at home) it seems that Pokémon is getting back to some simpler colors with Pokémon Black Version and Pokémon White Version. Insert your own Peter Molyneux joke here.

Though I'd predicted that the games would be launch titles for the 3DS, it looks like I was wrong - the games will be coming out for the regular, plain ol' DS, and will be released in Japan this fall. Judging by HeartGold/SoulSilver, hopefully this means we'll be getting Black & White here in the West in the beginning of 2011.

Other than that, we don't know much about the new generation of games, other than it will be adding at least two new pocket monsters, seen here: Zoroark, the Dark-type Monster Fox Pokémon, and its pre-evolution Zoroa. Nintendo is promising that "every aspect will be reborn innovatively," translates Joystiq, but what that means is anyone's guess.

I guess we'll be learning more soon - either on Sunday as originally announced, or on April 15th as mentioned on the official website. Until then, I'll be over in the corner squealing in glee and preparing to catch 'em all. Again.