I have a question rising from my experiences as a female gamer.

I’m a 23 year old woman. I study games design and digital art, I’m planning on a career in this area and I have a boyfriend who does games programming. I’d like to think of myself as reasonably well-adjusted, especially when it comes to gaming; I’m hardly a recluse gamer. In fact, I love the social aspect of gaming and will pick a decent multiplayer over a decent singleplayer anyday. I game a little everyday, mostly with my boyfriend, and also have a social life. It mostly involves gaming in some way shape or form, but we connect on more levels than that, and are just as happy camping, playing pool, going to the pub or a movie.

My problem is… all my friends are guys. It’s not a conscious thing; it’s simply that I have no female friends that share my interests. The few girls I do hang out with are a completely different social group, and I find myself losing more and more common ground with them. I simply do not enjoy what they do anymore. I’m usually ok with being “one of the boys”; we’ve had a long enough relationship that they accept me, and while I won’t accept some things (say, “get me a sammich” jokes), it’s balanced by my not taking advantage of being female (“oooh, you can’t shoot me, I’m a girl!” behaviour).

This should be all good. But I worry about losing common ground with other chicks. It is at a point where I don’t meet the girlfriends of my mates because “they’re girls and don’t understand gaming”. So they are treated differently to me, and I miss out on meeting other girls. Am I missing out on as much as I suspect? Or is it ok being a bit different and having different interests? Sometimes being a female gamer and designer is a bit like being a female mechanic – it can break the gender boundaries. I just wonder if I sometimes miss out on what female friends have to offer. I’d love to share my own interests with them, but it just never seems to work.

Very interesting question. What’s the point of having female friends if you are a young woman? This is an issue that transcends gaming, but may well be complicated by your immersion in the gaming culture. Many young women feel there are certain things they prefer to share with other women that are more difficult to talk about with males. These include (I’m told) issues related to intimate and sexual relationships, women’s health issues, and discussion of feelings and emotions in general.

I’m probably stereotyping a bit here, but most women are more comfortable talking in depth about feelings and emotions than most men. In fact, I would go further and admit that most men suck at it and have no patience for it. Even sensitive psychologists like myself! There is a kind of sisterly and even maternal mentoring, sharing, and role modeling that women can provide to other women that many have found essential in their development as adults. I have also been very impressed at the detail and clarity of discussion of sexual matters that women get into. They are generally much more honest and direct about this stuff than most men, who in spite of their cheeky bravado, are generally quite squeamish about the details. I also think you will be hard pressed to find a man who truly understands the challenges and issues of having a female anatomy and cycle. While some of us make a sympathetic effort, there is truly nothing like having one yourself.

I do believe you can get many of your emotional needs met by guys, but not all of them, so its understandable that you would feel a nagging sense of absence. In spite of how great your life sounds, and it does sound great, you are aware that something is missing.

While it may be hard (though I think not impossible) to find girls who can relate to gaming, it shouldn’t be hard to find girls who can relate to being girls in a guys’ world, and you might benefit from putting a little more effort into this. Are there conferences or symposiums for women game designers you could attend? Are there groups of female gamers who connect and commiserate over the internet (if not, maybe somebody should start one)? I am also finding a growing number of young women who game and interact intensively with the gaming culture, so there may be an increasing number of candidates emerging. Aside from gamers, you might connect well with other women who find themselves in all-male bastions, like mechanics, but there are many others as well.

I do believe it is “OK” to be different and have different interests than most women your age, but I don’t think this means you have to be deprived of a kind of relationship that can be incredibly meaningful and important. If your efforts to create this in your life are unsuccessful, we could wonder if there is some way in which your experiences with women growing up affected your ability to trust in close relationships with them. Were that the case, psychotherapy could be very helpful. 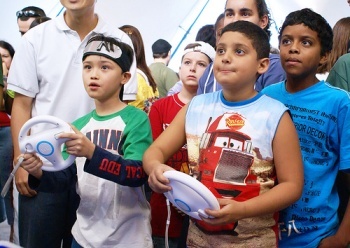 My in-laws are raising the child of one of their daughters. I’m her aunt, but I act as a “sparent” – spare parent – and am actively involved in her life. She is almost six, and has ADHD but it is controlled with very moderate amounts of medication and what I call “smart parenting” – knowing how to redirect when she obsesses over things, as well as keeping her on schedule with sleep and eating well.

I spend a lot of time with her, helping with homework, swimming, biking, watching movies, reading books, drawing, playing dress up, guitar or piano lessons. But we also and most regularly play video games. It’s a motivator – she must get good conduct at school, finish homework, eat vegetables at supper, take care of her dog, do chores and control her temper to get an hour and a half of gameplay during the week – three on Saturdays and Sundays. It starts after supper and ends at snack-and-story time. She has since made a vast improvement in her grades/conduct in school. She is also self-identifying as a smart kid due to figuring how to win games – we play platformers like Warioland Shake it, puzzle-based games, sims like Animal Crossing, and light RPGs like Pokemon: Pearl.

However, anytime I talk about how we play video games to non-gamers (and even some gamers), they express varying levels of shock, distaste or outrage, saying that a kid her age a) shouldn’t be exposed to game violence even if it’s jumping on a Goomba, b) should be more focused on imaginative play, or c) that it’s ruining her ability to function socially. I’d feel a lot better rebuffing them if I could get a second opinion from you, because frankly, sometimes I do worry that she focuses too much on gaming – though she’s extremely talented at making up her own stories at story-time, reads above her grade level and knows math better, I think, for having played games where she is encouraged to solve puzzles and complex equations – especially in Pokemon, sometimes it’s like calculus with cute animals! But she still does obsess – and I don’t know if it’s the addictiveness of games (read: something to be concerned about) or simply a side effect of being ADHD (read: something to tolerate). How do I know if I’m walking this fine line right?

First, let me say how lucky this girl is to have you in her life! Having an aunt like you could make all the difference in how she turns out, especially given the potential complexities of being raised by her mother’s parents. You have outlined a virtual textbook of how to raise an active, rambunctious, and energetic child, ADHD or not. You are helping her develop good work habits by building structure in her life, and you are encouraging her to be imaginative, creative, and varied in her interests. You are also promoting responsibility, healthy diet, and the value of exercise. Most importantly, you are just there for her–she has the opportunity for a close relationship with someone who clearly loves and cares about her, and I’m sure she will turn to you in times of need.

I play with many kids (my own and clients) each week. From the age of about five, the thing they most want to do is play videogames. They hear about it from peers and older kids. Its a kind of play that has deeply penetrated their culture and it isn’t going anywhere. Some parents try to avoid this with young children by prohibiting it entirely, and you could make a case that there are plenty of other fun ways to occupy a six year old. On the other hand, I recently attended a concert given by one of my kids’ school groups, and I was surprised to see, as the lights dimmed, so many little children with their heads bowed, looking down on blue-lit DS or smartphone screens playing games–probably to quiet them so their parents could enjoy the concert. It had a surreal quality, like there was a kind of prayer service for the young going on simultaneously with the concert.

Its clear to me that you see benefits for this particular child with selected and supervised gaming, and that you are trying to teach her how to integrate this into her life in a healthy way. This is well worth doing, in my opinion, because she will be growing up in a world where gaming will be everywhere. I have also seen situations where young kids who know a lot about gaming gain a certain social cachet because it is viewed as cool among peers and because they have something to add to the topic everyone is talking about (gaming). So in an odd way, this might help her develop social connections rather than ruin her ability to function socially.

I doubt the very mild violence in these games will do her serious harm, but I hope to address this issue in more depth in a future column.

I think you should keep an eye on the obsessing. It may reflect an over-valuation of certain games or of the gaming experience in general, and I think your goal should be to keep the menu as broad and varied as possible. Can you identify other kinds of games that she might also enjoy and come to see as a reward? There are so many clever word and board games out there for young kids. I think many parents would see this amount of videogaming as too much for a six year old, but I wouldn’t be surprised if many six year olds have this much screen time (1.5 hours per day and 3 hours per day on weekends) in total. You might want to keep total screen time within these limits, be it TV or gaming.

Its wonderful that she loves to play–psychologists have been touting the importance of this, especially imaginative play, in child development for many years. If videogaming can be seen as enhancing, or at least being a part of imaginative play, rather than antagonistic to it, more professionals will support it as part of the menu.