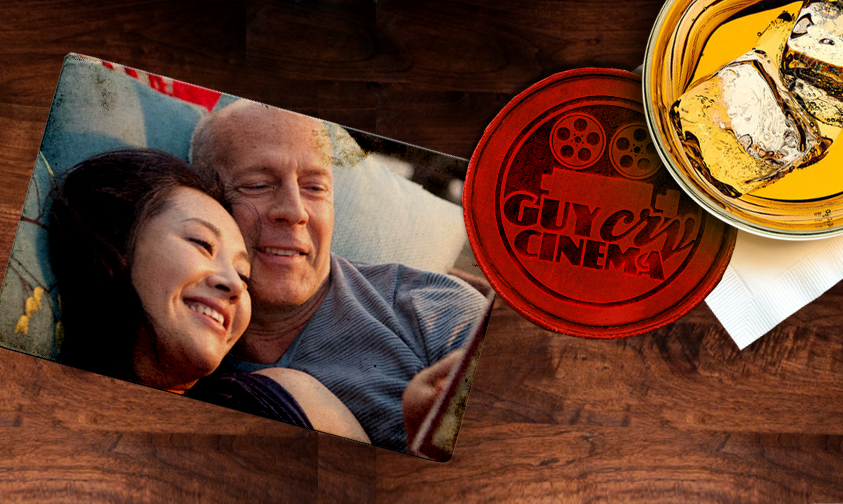 Tough Guy Bruce Willis has been in a few tear-jerkers. Here are five movies that make guys get all weepy.

He’s the man. The manly man. The man in tights. Wait, no tights, he’s too manly for that. Bruce “Yippi-ki-yay” Willis is so manly, his hair fell out and no one made fun of him. He’s so manly that he made Ashton Kutcher cry when the little punk cheated on Demi Moore. He’s so manly that he’s the only one of the “old guard” from The Expendables franchise that’s still non-painfully making current action movies (Sorry Stallone, you look like a monster). But as manly as Bruce Willis is, he still has a soft side that his movies frequently express. Whether it’s Bruce himself conveying the emotion or someone else in the movie Bruce is headlining, Mr. Willis can be counted on to make guys lie and claim something’s gotten in their eyes.

This is a fantastic movie, yet I can’t bring myself to re-watch it. There are just that many sad and disturbing parts. The past/future torture scene is disturbing, sure. The Bruce killing a child that turns out to be an innocent bystander scene is horrible, yes. The Bruce is played by Joseph Gordon-Levitt doing a Bruce impression is weird, absolutely. But one of the most emotional parts for me is a subtle, almost overlooked aspect of his character.

Bruce is a young mobster, but in his later life he falls in love. Bruce’s entire motivation for traveling to the past is to stop the future where his love dies. As fast and loose as this film plays with the rules of changing the past, the one consistency is that changes to the past ripple through within a matter of seconds. So every time Bruce makes a change (or thinks he did), he stares at a picture of his love and frantically tries to hold on to her memory. Reminiscent of an Alzheimer’s patient feeling their mind slipping away, the fear in Bruce’s eyes as he worries he’s forgetting the one good thing in his live is extremely moving.

Depending on who you ask, this movie is either trash of the lowest caliber, or a classic destined to sit on the shelf with Independence Day and other explode-y movies. But no matter who you ask, the scene where Bruce sacrifices himself instead of Bat-fleck is amazingly done. In one move, Bruce gives his approval of his daughter’s choice in boyfriend, accepts Bat-fleck as his son-in-law, earns his daughter’s respect despite a lifetime of being a poor father, and saves the entire planet. That’s a pretty big step for all mankinddoooooOOOOOOOHHHHHH DID YOU SEE WHAT I JUST DID THERE?!!!

To those who say they saw the twist coming in this film, I have only one thing to say: You are no fun and any friends you do have don’t like you. At least on the first viewing, this was an immensely scary film, and yes, the twist was earned and fantastic. Heck, it convinced us that M. Night Shyamalan could direct a movie! (he got lucky)

Bruce failed one of his patients, which weighs heavy on him. His wife is distant and cold to him (shhhhhh). This kid shows up and seemingly gives him a chance to do one good thing in his life (SHHHHHHHH!) So Bruce gets emotionally investing in helping Haley Joel Osment, ironically another Hollywood person who tricked us (He was in Tusk). The end, when Bruce thinks back on the events of the film and realizes he’s dead is a masterpiece, even if it was a lucky accident from a hack director. Because Bruce willed it to be soooSEEEE WHAT I DID THERE?!

This was actually the first film this article series dove into. For my money, it’s the best Christmas film out there, aside from Iron Man 3 and Tim Allen’s The Santa Clause (I’m Jewish, so what do I know of Christmas films).

Carl Winslow, or as he’s known in real life, Reginald VelJohnson (seems more fake), is the real emotional core of this film. A beat cop, refusing to draw his gun due to an accidental killing in his past, helps Bruce throughout the film. At the end, when one straggler baddie tries to get the drop on ol’ Bruce, Reggie pulls out the largest hand cannon I’ve ever seen and eliminates the threat. He didn’t WANT to shoot anyone; he didn’t even want to use his gun. But the haunted look in Reggie’s eyes as his muscle memory overtook his emotional trauma speaks volumes.

Did you guys know the TV series based on this movie is fantastic? Has nothing to do with this article, I’m just letting you know.

Bruce Willis is sent back in time to collect a pure sample of the virus that killed the world for study, but at the end he realizes he’s in a causality loop. For those in the know, that means everything that happened did so because of what already happened. There will be no successful cure for the disease, because the attempt in finding one is in a loop of failure.

As disturbing as that is, we spend the entire movie watching Bruce’s psyche crack under the strain of everyone telling him he’s crazy and not actually time traveling. Then the film ends with Bruce as a young child watching his older self shot dead. It’s cruel, dark, and a little sad knowing that most of Humanity is about to follow Bruce to an early grave.

But seriously, the TV series is really cool.