MMORPGs are an acquired taste, but once you get the bug, you’ll find yourself pulled farther and farther in until you finally stand before a gigantic boss, about to take him down. There are some great MMO bosses out there, and we’ve gathered eight of them into today’s gallery. Each one is epic in its own way, and all of them are very memorable to those who took them on.

Don’t see your favorite boss here? Tell us who it is in the comments! 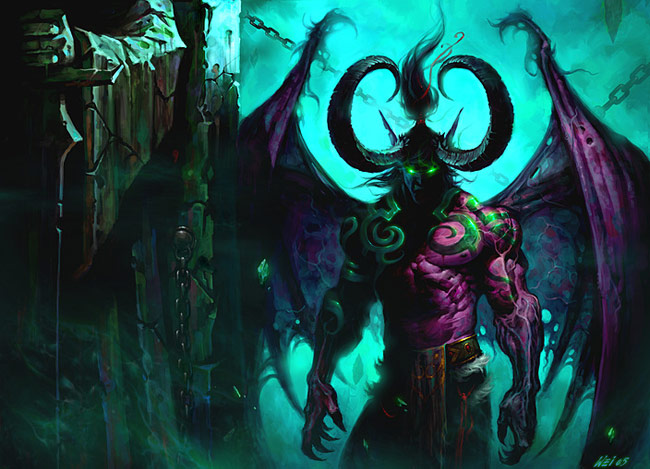 The headline boss of World of Warcraft’s Burning Crusade expansion, Illidan Stormrage awaited challengers high atop The Black Temple. The fight required that raid groups position themselves correctly, move at the right time, and switch healers and tanks in response to changing boss phases. Illidan went from his human form, to flying and spawning adds, to a demon form, and back again. The elation you felt when defeating him was only secondary to the disappointment when you saw that the much-coveted Warglaives of Azzinoth didn’t drop. 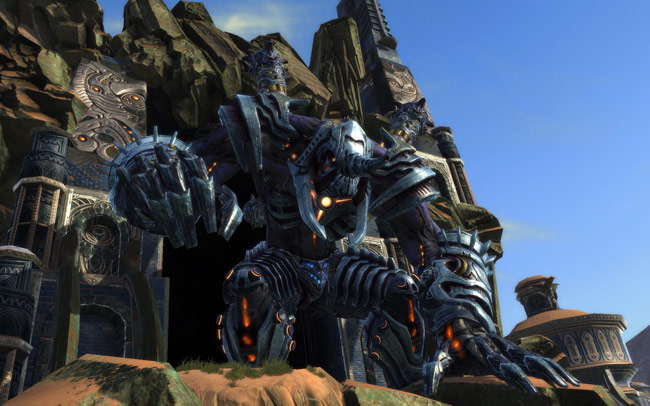 Volan is a gigantic robot-like colossus of a world boss that was added to RIFT in the Storm Legion expansion. Rather than sitting in an instance somewhere, Volan is actually part of one of RIFT’s daily events. The huge boss bursts out of the side of a mountain, and then takes on hundreds of players who are assaulting each of his limbs, using jump pads to fling themselves into the air, and even manning cannons to lay the punishment on him. It’s a truly epic experience taking on a monster of this magnitude. 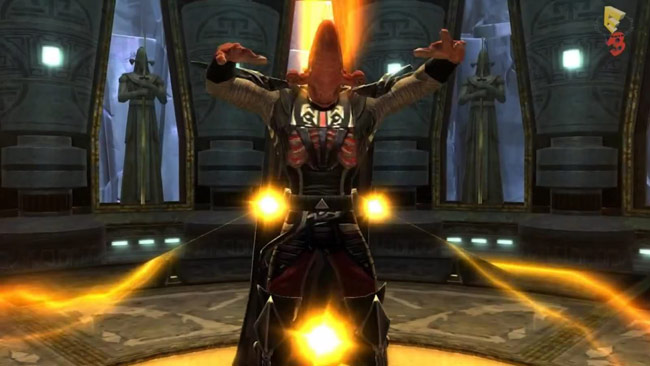 Soa, The Infernal One (SWTOR)

Soa is an extremely powerful, Force-sensitive Rakata who serves as the final boss in the Eternity Vault operation. While the fight against Soa is somewhat straightforward, the setting is not. Once his health is lowered to 75 percent of full, the floor will collapse, and raid members have to make their way down using platform of debris as they fall. Assuming they survive the treacherous trip down, they’ll be greeted by Soa, who will then use a variety of skills, including Force throwing a player around the room, to try and defeat the invaders. He can only be killed by maneuvering him under a falling pillar and stunning him, allowing the raid to deal damage directly to him. It’s a frustrating, but rewarding, fight. 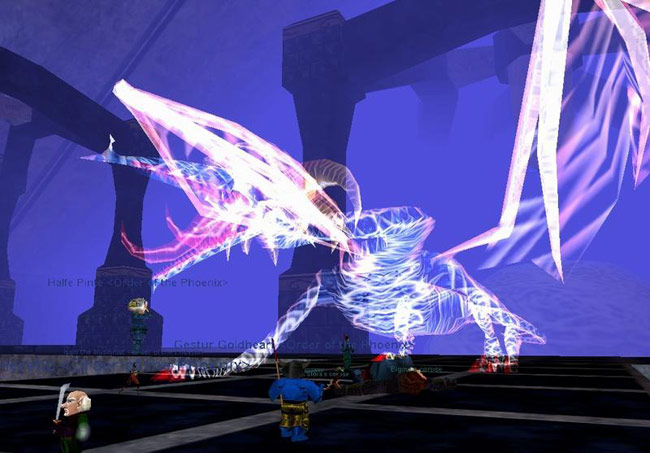 Old-school MMO players may never have seen Kerafyrm, The Sleeper, but they have definitely heard of him. Originally imprisoned in the Sleeper’s Tomb, Kerafyrm was simply a sleeping dragon until three guilds on the Rallos Zek server banded together to take him on. They first had to kill Ventani to awaken him, and then go head to head with the dragon. Their first attempt ended when SOE staff despawned the dragon due to concerns about a possible exploit. Undaunted, the guilds made a second attempt the next day, and after over three hours of hundreds of players zerg rushing the boss, and innumerable resurrections, they managed to defeat him once and for all. Interestingly, once the Sleeper was awakened, he was never again found in that dungeon, and the mobs and loot tables were permanently changed. 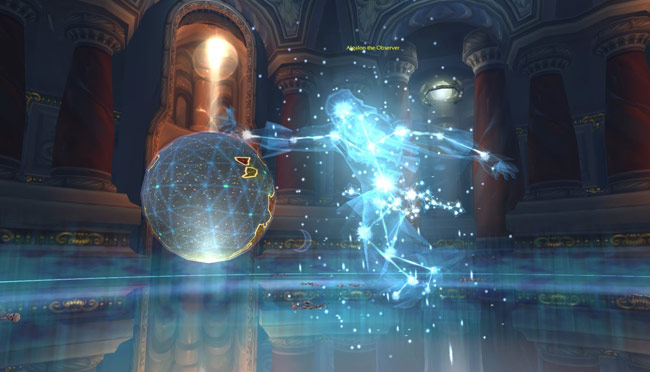 Algalon the Observer (World of Warcraft)

Algalon is the final boss of the hard-mode of Ulduar, and defeating him is so unlikely that Blizzard has jokingly referred to him as “Algalon the Raid Destroyer.” His most insane mechanic is called Big Bang, an explosion that kills anyone in the room. The only way to avoid it is to step into a black hole left by killing one of his adds. It sounds simple, but the catch is that if everyone in the raid goes into a black hole, he automatically wipes the raid. This means someone has to “take one for the team.” It’s a long, involved fight, but in the end, you’ve just saved the whole planet from being re-originated, so you’ve got that going for you, which is nice. 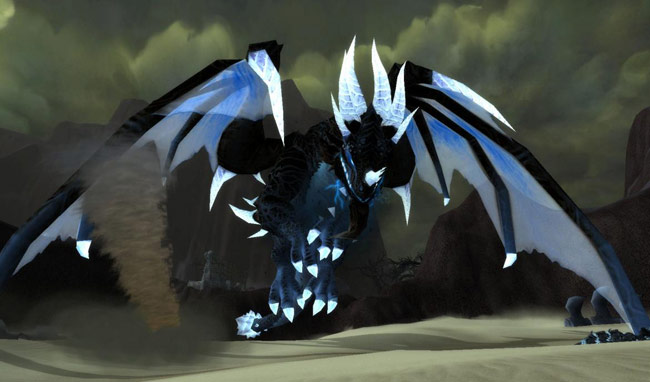 The leader of the Infinitie Dragonflight, Murozond resides in World of Warcraft’s Caverns of Time. While he’s not as difficult as some of the bosses here, it’s the mechanics of fighting him that make him one of our favorites. Murozond is the future incarnation of Nozdormu the Timeless, who protected the very timelines Murozond is manipulating. To help the raid defeat Murozond, Nozdormu gives them the Hourglass of Time, a device that lets them rewind time back to the beginning of the fight up to five times. If it sounds simple, that’s because it is. That said, it’s extremely cool in practice. Activate the hourglass, and you’ll see dead players come back to life, cooldown timers reset, and and all health and mana restored. The only thing that remains unchanged is Murozond’s health. It’s a fight where players get to spam their abilities secure in the knowledge that when time rewinds, they’ll be ready to go again. 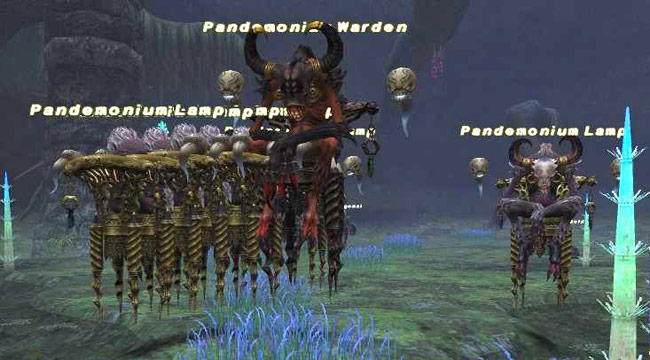 If you think three hours sounds like a crazy amount of time to kill a boss, this one will blow your mind. When it was first introduced into Final Fantasy XI, a group of more than 36 players spent 18 hours fighting it, and were unable to kill it. The attempt ground to a halt when the players became physically ill, fainting and vomiting after such a prolonged period of gaming. After seeing this result, the boss was patched to only have a two hour spawn timer, and if it was not killed in that time, it despawned. Its health was also significantly reduced at this time. To add insult to injury, there’s very little loot for killing Pandemonium Warden – just some cosmetic items that are more prestigious than useful. 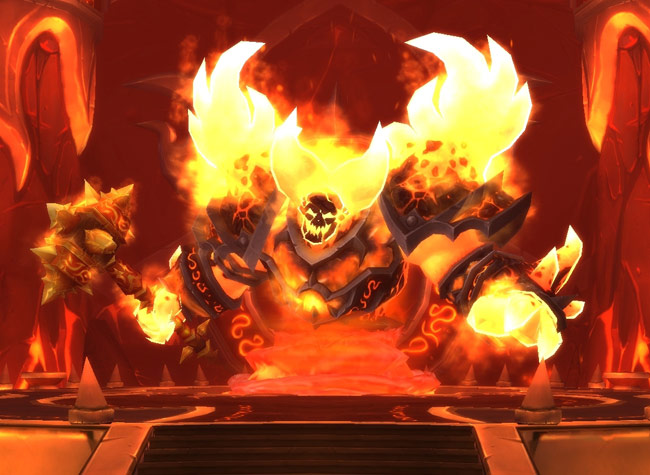 Ragnaros is such an iconic raid boss that he’s actually appeared in two separate raids in that role, but he was most memorable as the overlord of Molten Core. The challenge of recruiting, keying, and organizing 40 raid members is no laughing matter, and keeping everyone attention for the hours it took to clear Molten Core was daunting task in and of itself. But at the end of it all, you descended a winding cave and found yourself in front of a pool of lava. Ragnaros arose, and so began a cycle of trial and error, hoping that you could defeat him without falling in the lava or being taken out by one of the Sons of Flame. The first time Ragnaros fell, and all that was left was his mighty hammer, the elation was real.