There are plenty of DC villains who might show up on the new The Flash TV show, but which will be tapped for a small-screen appearance?

He’s sometimes thought of as one of the less-overpowered members of the Justice League, but The Flash has always been able to claim superhero street-cred in the realm of enemies: The Scarlet Speedster’s rogues gallery has been called one of the best in comics, comparable only to those of Spider-Man and Batman in terms of their diversity, size and notoriety.

Here are eight more costumed criminals who could be making Barry Allen’s life in the fast lane difficult should the producers decide to delve deeper into the canon (or just start looking for characters with interesting/unique visual possibilities, since they’ve already apparently said “yes” to the enormous talking gorilla).

ABRA KADABRA
As origin-stories go, Abra Kadabra has a doozy: He’s a regular guy who dreams of being a classic-style stage magician… who happens to have been born in the 64th Century — a time where science has achieved such real-life miracles as to make stage magic completely obsolete. So he time-travels back to our era, looking to pass off technological wonders of his future world as “magic tricks” in ours, only to discover that future-tech is also really good for committing crimes.

GOLDEN GLIDER
An amusing tendency of Flash-enemies is to form mini-communities out of connections other than being nemeses of The Flash. In the case of Golden Glider, she’s the sister of one villain (Captain Cold) and the lover of another (The Top). A world-class figure skater as a civilian, Golden Glider incorporates skating and ice-dancing techniques into her fighting style, making her a uniquely lethal opponent who also has a professional excuse to look as ridiculous as Flash enemies tend to look. 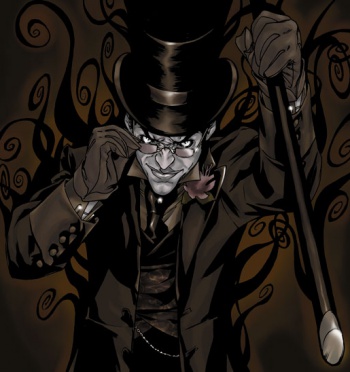 THE SHADE
A nemesis of the original Golden Age Flash, Jay Garrick, “The Shade” is one of a most powerful supernatural beings in the DC Universe. Typically seen in the clothing of a Victorian-era gentleman complete with top-hat and cane, he has the power to manipulate shadows and the darkness itself. His character, alignment and power-set are among the most frequently-altered of “name” DC figures, changing drastically as the result of varying successive crossover events.

MIRROR MASTER
An orphan turned career-criminal, Mirror Master possesses a Mirror Gun that allows him to turn any reflective surface into a portal he can use to leap from place to place via travel through the Mirror Dimension. Though a deadly supervillain, he’s not without compassion — a portion of his criminal “earnings” are always donated back to the orphanage where he grew up (which you’d think would make him really easy to track even for non-metahuman police… but no).

THE TRICKSTER
A circus acrobat with criminal ambitions, James Jesse uses colorful gadgets like exploding toys and high-tech “air walking” shoes in his conflicts with The Flash. In comics-continuity, he has outwitted the Devil himself at least twice, and was memorably portrayed by Mark Hamill in the 1990s Flash series.

THE FIDDLER
Another Golden Age Flash foe, Fiddler was an English-born pickpocket living in India where a Hindu fakir taught him the use of music to hypnotize people and animals in the manner of a snake-charmer. As an adult, Fiddler uses these skills via a violin to commit crimes and/or force others to do it for him.

THE FOLDED MAN
The Folded Man is an MIT-educated genius who builds himself a dimension-bending suit as part of a quest to solve Einstein’s Unified Field Theory. As you’ll no doubt recognize as a “theme” for these fellows, he quickly discovers that it’s more profitable to use this stuff for committing crimes.

DOUBLE DOWN
A con-artist, small time crook and compulsive gambler, Double Down gained his identity when a cursed deck of cards belonging to a man he murders over a card game bonded itself to his skin. The cards can be flung outwards as self-propelled slashing weapons similar to throwing-stars. Though guilty of many heinous crimes, he was not involved in the creation of the alleged “sandwich” which shares his name.