It’s never easy saying goodbye. These 8 weird, terrible endings didn’t know how to present a denouement, and left us (and everyone else) just saying “Huh?” to the screen – often in anger.

Because The Escapist tries to be better, I’m aiming for 8 games with completely jarring, tonally inconsistent endings. There might be worse ending out there, but these eight are plain baffling, off-putting, or completely at odds with audience expectations. Sometimes it’s good to surprise, but these 8 endings prove that being different doesn’t always mean being better. 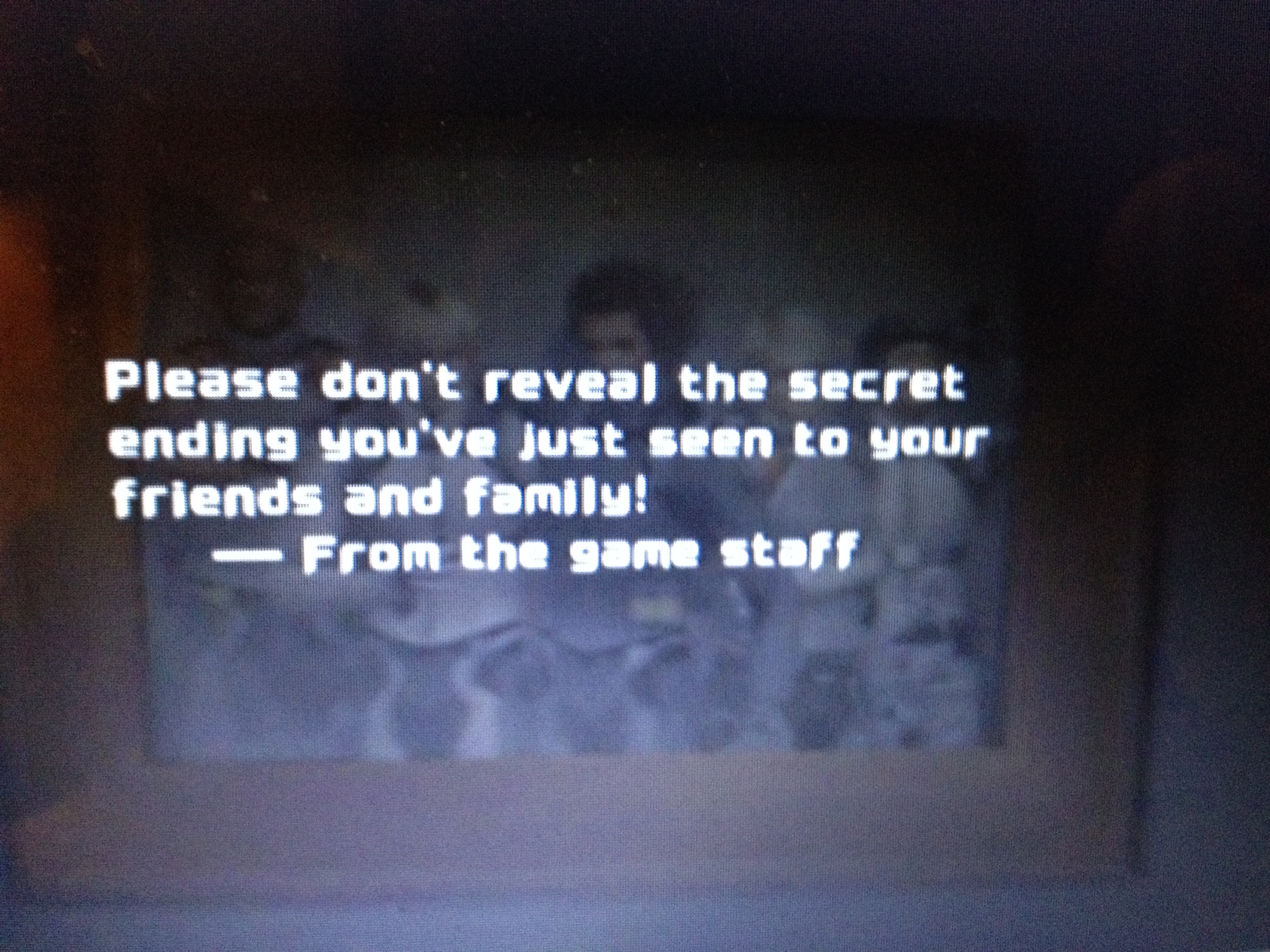 The ending to Spy Fiction is amazingly ridiculous. The whole game is an under-cooked Metal Gear Solid bite with terrible gameplay, but the ending is the cherry on this crappy sundae. Not only do you have to play the game twice to earn the “true” ending – the ending itself is completely ridiculous. A former friend (who died) turns out to be 1) alive 2) a double agent and 3) your long-lost brother.

Sure, all of that is stupid, but the true kicker has nothing to do with the in-game events or cinematics. No, the real “Huh?” moment occurs while the credits are rolling. A message appears with the following text; “Please don’t reveal the secret ending you’ve just seen to your friends and family!” – From the game staff.

The Conduit 2 is a pretty minor game in the grand scheme of things. For a Wii-exclusive scifi shooter, it’s pretty good – generic, but okay – and mostly inoffensive. Until that ending. Conduit 2 drops the mic in an epic way – after defeating the final boss (a guy named Adams, ridiculously clad in business wear and wielding a rail gun) a pair of saviors appear from the portal.

If you don’t already know, it’s time to sit down. Conduit 2 is kind of the National Treasure of scifi shooters, involving conspiracy and a visit to American institutions in Washington D.C. With that in mind, maybe it isn’t completely shocking that Abraham Lincoln and George Washington appear in power armor. That’s the cliffhanger. There will be no sequel.

The Star Fox spin-off on Nintendo 2DS is… unique. Instead of one completely baffling ending, this game is full of baffling endings. Who wrote this thing, and why? All I can do is document some of the insane endings for you, the reader.

In one ending, Crystal (Fox’s love interest) joins nemesis team Star Wolf, changing her name to Kursed. In another, Slippy gets married to a pink frog and tells tales about his time flying with Star Fox to a gaggle of frog children. In yet another, Dash Bowman (grandson of the first game’s big bad guy Andross) goes off to start his own empire, then wages war with the galaxy for some reason. It’s all sub fanfiction nonsense, and completely jarring in a simple shooter like Star Fox. But, these endings are probably the only memorable thing about Star Fox Command.

One of the most classic, off-putting endings comes from an old fan-favorite – Monkey Island 2. The developers, Lucasarts, were at the height of their creative power when creating Monkey Island 2. Before long, they’d release classics like Day of the Tentacle and Sam & Max. But first, we have to talk about Monkey Island 2.

This is a list of “huh”-inducing endings, and the meta-conclusion to Monkey Island 2 literally comes out of nowhere. After defeating LeChuck, the evil undead pirate, he makes a final request – take off his mask. That’s when things get weird.

LeChuck, as it turns out, is your brother. They start to talk about dolls, being picked-on, and finally leave the underground chamber to meet their parents, waiting outside in a seemingly normal. modern amusement park. It isn’t a trick. There isn’t more to the game. That’s the end. It’s entirely uncomfortable, and fans of the series are still scratching their heads over this one.

Minecraft isn’t exactly a game you play for the story, but the “ending” is one jarring experience. You can “win” Minecraft, all it takes is a trip to “The End” – the last alternate dimension your blocky butt can visit in the vanilla game. It requires a whole lot of everything that’s hard to find, but after opening a portal to The End, you’ll be able to do battle with the fiercesome Ender Dragon.

It’s pretty epic – doing battle with a giant dragon in an endless, mysterious void. Things don’t get really weird until after the big bad beast is slain. An exit portal activates after slaying the Ender Dragon, giving you a free return trip to the regular Overworld. Leaving through this portal produces the “ending” – in the form of, the “End Poem“.

The poem is about two unknown god-like speakers, discussing the accomplishments of the player in a very meta way. They discuss games, the player, the screen – it’s mysterious, and kind of weird, and probably not what most of us were expecting from a Minecraft ending. Maybe that means it succeeded? 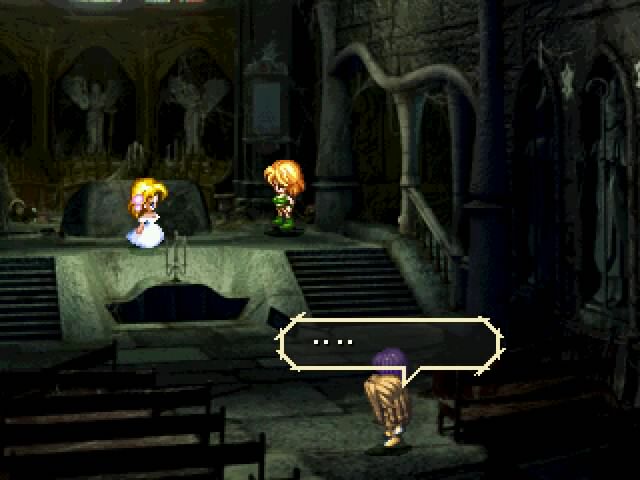 Saga Frontier is infamous for bizarre, impossible to explain endings. This game is like Star Fox Command on steroids – every character get their own ending, and they’re (basically) all strange.

In one ending, the character (Emelia) hunts down the true killer of her fiance. Late in the game, she abandons her quest and gets married to one of the party members. The marriage is fake, and the groom pretends to be the heroine’s dead fiance. This is all out of nowhere. Suddenly, during the false ceremony, a giant angelic monster appears and attacks the party. Defeat it, and enjoy your credits because the game is over. No plots are resolved, the killer is never found.

That’s just one example. In another ending, you play as a wizard that combines with their evil twin brother, who then fight the ultimate being for all eternity. This is presented in the worst way possible – with zero explanation, the final boss battle fades to black in the middle of the fight, leading directly into the credits. Enjoy your ending?

It’s hard to classify anything LOST related “Huh?”-worthy. The TV series baffled fans from 2004-2010 with unresolved twists and seemingly random goings-on. Via Domus, a video-game tie-in game, landed smack dab in the middle of the LOST craze in 2008 – meaning that the “truth” of the story had not yet been written. As if that matters.

Okay, so here’s the ending – the hero returns to the beach to witness the plane crash that kicked off the series, while standing in the wreckage of the very same crash. While watching the crash landing, the protagonist’s (dead!) girlfriend suddenly returns, congratulating the hero and letting him know they’ve both survived the crash. What does it mean? Is it a time paradox? Or just more nonsense twists that don’t add up to anything at all?

Realms of the Haunting

We’re digging deep now. Realms of the Haunting is an interesting little horror-FPS experiment. There’s a creepy mansion to explore, multiple alternate realities to visit, and an arsenal of magical-infused weapons. There are also tons of FMV cutscenes spread across four discs – and all that story leads to a complete mockery of an ending that makes no sense, confused players, and left a bad taste in everyone’s mouth.

Here’s how it goes. Adam Randall, chosen one and block of wood, escapes the evil mansion after defeating the forces of darkness. The mansion explodes behind him, the bad guys are defeated, and the prophecy has been fulfilled. Sounds like a happy ending, right? Wrong.

Fade to black, and Adam Randall is locked up inside an insane asylum. Various characters from the adventure look on into his cell – his former love interest, and a demonic villain – before slamming the door shut on the case. Was Adam Randall crazy all along? Is he stuck in a hellish asylum somehow, despite defeating the forces of evil? Who knows and who cares.