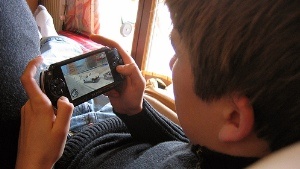 The PSP2 is probably real, but we’re not going to get Sony to admit it until they’re ready to do so. Acclaim’s David Perry‘s sick of all the sitting around and jibber jabbering, so he’s just going to say it: the PSP2 is real and could be coming this fall.

Perry, who is the Chief Creative Officer at Acclaim and is better known as the father of classic franchises Earthworm Jim and MDK, spoke to a friend of his who is apparently already working on a game for Sony’s next handheld wonder. “I spoke to a developer who is working on it right now,” he told Kotaku. “I know this developer is already working on it, so that means they have a prototype. That would sound like a fall release to me.”

Which couldn’t be sooner, Perry thinks, considering how quickly Apple’s gaining ground in the portable space and the already well-established dominance of Nintendo’s DS. “I’ve been pounding on Sony for a long time to make the Playstation Portable relevant and not to let Apple stroll away with the portable game market,” he remarked. “Look at what Apple is doing now. Why are so many investors investing in Apple game development? Trying to pitch a PSP game to investors right now is brutal.”

Perry says that the PSP2 will not support any kind of physical storage medium. I don’t blame Sony for not wanting to try another UMD after that disaster, but what, are they going to go entirely digital? Perry thinks so, saying that he imagines the PSP2 will work entirely via digital downloads and by interfacing with your computer.

No UMD? But how would backwards compatibility work, and how would I be able to watch my copy of Lethal Weapon 3 on UMD when I take long bus rides? Though he doesn’t say anything about UMD movies, Perry sees Sony putting all past games on their digital store. Seems like a pretty hefty task to me.

The other problem with going all digital is how Sony’s going to work that out with retailers, who will effectively be selling machines that they won’t be able to sell any games for, if Perry’s right. To balance that out, Perry imagines, Sony will sell early PSP2 games on memory sticks or prepaid cards to redeem online.

Well, it certainly does sound a bit more like Sony than the last rumor that the PSP2 would be going the iPhone route with a multi-touch screen, an idea that we thought was too “follow the leader” for Sony’s style. Still, full-on digital games? We all know it’s coming, but as soon as this fall? If it’s true, it might be another case of Sony getting a little bit too ahead of itself.

UPDATE: Sony’s director of hardware marketing for the PSP, John Koller, has denied the existence of any new hardware dev kits out there, which doesn’t exactly contradict what Perry said, because he mentioned prototypes and not dev kits. At the same time, Koller remarked that Sony’s thinking is very much in line with the ideas about digital distribution Perry mentioned. Asked to completely set the record straight on whether the rumors about a no-UMD PSP were true or not, Koller had this to say:

“Can’t comment either way, but I will reiterate that the digital component is very important to us. That’s all we can say at this point.”

Make of that what you will.