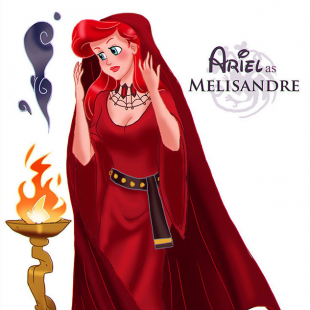 When it comes to fantasy, Disney and Game of Thrones employ takes on the genre that sit very much on opposite ends of the street. Disney films have their darker moments for sure, but they generally adhere to a standard of kid-friendliness that precludes Game of Thrones mainstays like nudity, sex and heart-wrenching massacres that destroy the viewer’s soul. That being the case, there are still plenty of people who love and enjoy both and, as countless occasions have proven, where’s a cross-section of fans there’s a crossover waiting to happen.

Case in point, DeviantArtist member DjeDjehuti recently posted a collection of female Disney characters reinterpreted as figures from Game of Thrones. The gallery, which contains more than a dozen illustrations, includes a good portion of the major female characters from both. The match-ups aren’t just arbitrary either. DjeDjehuti seems to have put some actual thought into which characters they paired up. Rapunzel as Sansa Stark, for instance, works well on account of both characters spending their time “captive or locked up in one tower or another.” Belle as Margaery Tyrell also makes a sort of sense thanks to the prominent “rose imagery at the heart of Beauty and the Beast.

Despite the intelligent reasoning behind a lot of the match-ups however, I will confess to a few rubbing me the wrong way. Snow White being turned into the prostitute Shae, for instance, just seems a bit wrong when you consider that her character looked maybe all of 14-years old in the Disney movie. Likewise, except for her red hair, bright-eyed drama queen Ariel arguably isn’t exactly the best match for the stern and dogmatic Melisandre (something the artist admits). Nonetheless, it’s an entertaining collection of pictures and, in the least, it’s always fun to see familiar characters portrayed in different ways.

8 Reasons Nicolas Cage Is The Best Actor Of His Generation