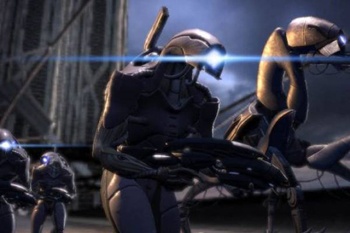 BioWare has released the system specs for the PC version of Mass Effect 2, handy information for fans wondering if a system upgrade is looming in their near future.

There are two kinds of PC gamers out there. There are guys like me, who want a game, preorder it and then if it turns out that we can’t actually run the thing, upgrade our PCs accordingly without a second thought. (We’re generally the same guys who plead poor when it comes to things like food, clothing, paying the rent, etc.) And then there are the folks who pay attention to system specs because their computers are a few years old but they’re still running fine and they don’t want to waste money on a game they can’t play.

Good news for that second group: The minimum requirements for Mass Effect 2 really aren’t all that terrible. You won’t get all the bells and whistles, but you will be able to play, even with a fairly basic system. Minimum specs are as follows:

Now, if you happen to want all the bells and whistles, this is what you’ll have to bring to the party to get them:

Windows XP SP3 / Windows Vista SP1 / Windows 7
2.6+ GHz Cure 2 Duo Intel or equivalent AMD CPU
2 GB RAM
ATI Radeon HD 2900 XT, NVIDIA GeForce 8800 GT, or better recommended
100% DirectX compatible sound card and drivers
DirectX August 2008
NOTES: For the best results, make sure you have the latest drivers for your video and audio cards. Laptop or mobile versions of the above supported video cards have not had extensive testing and may have driver or other performance issues. As such, they are not officially supported in Mass Effect 2. Intel and S3 video cards are not officially supported in Mass Effect 2.

And for those concerned about intrusive DRM, BioWare Community Coordinator Chris Priestly also noted that copy protection will be minimal. “The boxed/retail PC version of Mass Effect 2 will use only a basic disk check and it will not require online authentication,” he wrote on BioWare’s Mass Effect 2 forum. “This is the same method as Dragon Age: Origins. Digital versions will use the retailers protection system.”