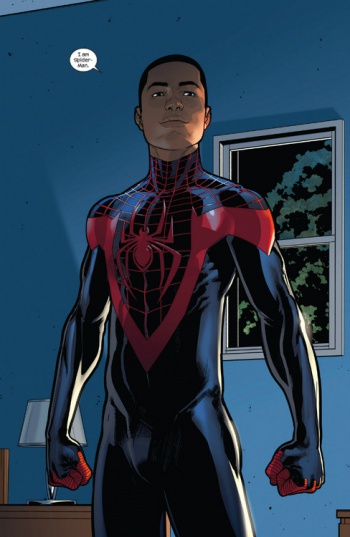 Ultimate Spider-Man‘s Brian Michael Bendis thinks heroes like Miles Morales are true-to-life, considering “there are very few people in the world who look like Captain America”.

The Ultimate Marvel Comics line may not be everyone’s cup of tea, but when handled correctly it’s produced some of the best superhero books on the market. One popular example is the long-running Ultimate Spider-Man, where Peter Parker was killed by Green Goblin replaced by Miles Morales, a half-Hispanic half-African American teenager. The decision met some controversy, but Morales proved to be a successful character, one prompting a rebranding of the series as Miles Morales: Ultimate Spider-Man. To Bendis however, Morales is part of a larger effort to make Marvel more diverse, something he thinks will pay off for comics and film audiences.

“We made the determination that, if Spider-Man were created today, there’s a very large percentage chance that, based on where he’s living and who he is, that he would be a person of color,” Bendis said in a recent interview. “So we made the choice to send Peter Parker off with a heroic death and have a new young man take the mantle in the form of Miles Morales, who’s half Hispanic and half African-American. That gave a multicultural voice to Spider-Man that was always there, but never fully championed in the books themselves.”

Marvel’s characters have become exponentially more diverse across comics and film in recent years. While DC still struggles to provide Wonder Woman her own movie, Thor‘s Heimdall is being played by Idris Elba and the fan-favorite Captain Marvel has been reimagined as a female superhero. Reactions to these changes haven’t always been positive, but so far Marvel shows no sign of slowing down. To Bendis, this isn’t so much a change within Marvel as it is a better understanding of the company’s audience.

There was no big meeting. It’s a few things. I know I sound like I’m a hundred years old when I say this, but with the growth of the online comics community came more awareness of the world and who’s really reading these books. And y’know what? Sure, there are people who look like Captain America who read comics, but there are very few people in the world who look like Captain America. I go to conventions, and you meet hundreds of people over the course of the day, and no two of them look alike. You see women and people of color who love comics, and there’s nothing representing them in a way that isn’t sexualized or something.

Now, you can’t make these decisions [to be more inclusive] consciously, because then you’re just writing in reaction to things, and that doesn’t work out, dramatically. But subconsciously, if you look at the world around you and see your readers, you go, I wanna write something that I know is true. So you start writing women better and you write people outside of your experience better, because you look at pages of other people’s comics and you don’t recognize it as the world around you.

Bendis notes that when it comes to racism and sexism, the comic book community could learn more from its heroes. That being said, responses to diverse characters remain largely positive, and Bendis even hopes to see Morales appear in Sony’s cinematic universe. Unfortunately, while I love what Bendis has done with Ultimate Spider-Man, Morales isn’t about to don the costume on film anytime soon. Oh sure, he could be a secondary character, but even Marvel’s mainstream continuity barely surpassed a year with an old white Spider-Man before it brought back Peter Parker.

On the other hand, if Spider-Man gets rebooted for the third time in ten years? Maybe that will be Sony’s cue to try Miles Morales: Ultimate Spider-Man for a change.

Adam Sandler’s Pixels to Begin Shooting, Will Hit in 2015