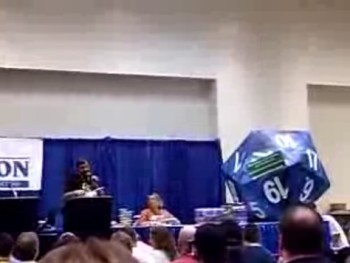 An unfortunate “misunderstanding” between GenCon Indianapolis and the Christian Children’s Fund has derailed a hefty donation to the charity that was meant to honor the late Gary Gygax.

Each year GenCon holds an auction and other events to raise funds for donation to a chosen charity, and after raising almost $10,000 for Christel House in 2007, for 2008 it was decided to honor the late Dungeons & Dragons creator by sponsoring the Christian Children’s Fund, described as Gygax’s “favorite charity” and one he had donated to personally many times in the past. The auction raised over $17,000, highlighted by the sale of a six-foot-wide 20-sided “Gygaxian” die, which ultimately went for $1500.

According to a report by Live Game Auction, all was well until the CCF discovered that some of the donation would come from the sale of Dungeons & Dragons merchandise. Apparently the whole monsters/devils/Tom Hanks stigma still drips from the game like the pungent stench of mildew that emanates from wet dungeon walls, leading the CCF to decline the donation. As a result, the Fisher House Foundation, a charity that supports wounded U.S. soldiers and their families, became the beneficiary of GenCon’s generosity.

Predictably, gamers familiar with the situation were deeply slighted by the CCF’s refusal to take their money, particularly as the donation was meant as a kind of memorial to Gygax. Giant in the Playground posted an article describing the affair, saying, “The charity refused due to the fact that the money was raised partly by the sales of Dungeons and Dragons materials, which as we all know, puts an irrevocable taint of evil on the filthy lucre that us demon-worshipping gamers might want to use to, say, donate to starving children. Not only is this a slap in the face to every gamer, but it is especially insulting to Mr. Gygax himself, who I understand donated to their cause many times over the years. Plus, I’m sure the children who would have gotten food or clean drinking water with that money would be sort of upset, too.”

But according to Cheri Dahl, vice president of international communications and fund raising at CCF, the uproar is the result of a “misunderstanding” that appears to have caught the charity by surprise. “When GenCon contacted CCF about its auction, we were pleased to accept donations. However, we couldn’t lend our name for publication because our policies have specific criteria for endorsements,” Dahl said. “We were unaware that this had caused any problem or concern for GenCon until we began receiving emails.”

“This decision was in no way intended to be a reflection on Mr. Gygax, gaming enthusiasts or the game Dungeon and Dragons,” she continued. “We have the utmost respect for the gaming community and were touched by the generosity expressed through your auction. We were disappointed that we were not the recipients of the donation but we were pleased that another worthy organization benefited.”

I’ve asked Ms. Dahl what “specific criteria for endorsement” the CCF insists on that prevented its association with GenCon, but at this point things appear to be not so much sinister as simply the result of poor communications between the parties involved. And, as Dahl pointed out, the gaming community was still able to contribute to a different but nonetheless very worthy charity; not necessarily the ideal outcome, but one to be proud of nonetheless.

(And if you happen to be wondering what a six-foot-wide 20-sided die looks like, you can watch the auction here.)