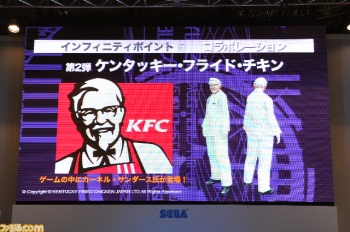 Remember how Activision CEO Bobby Kotick said that in-game advertising shouldn’t be used unless it makes sense? Sega isn’t exactly on the same page for Phantasy Star Portable 2 Infinity, but I think I’m glad about that. Sega recently revealed that Kentucky Fried Chicken founder and semi-mascot Colonel Sanders will be a partner character in the game.

He’s not just going to be sitting around a town eating gas-inducing chicken: Colonel Sanders will join up with the main character and fight monsters alongside him. Current shots caught by Famitsu of the Colonel in combat don’t appear to show what he’ll be using in his arsenal aside from his cane, but the previous sentence holds my best guess for other attacks.

I haven’t seen any mention of what the upcoming KFC items will be, but aside from the obvious food-related ones I can’t wait to see what Sega will come up with. A giant drumstick sword perhaps? A biscuit shield? The Escapist’s correspondents are currently digging around the Tokyo Game Show, so maybe they’ll be able to shed more light on the situation.

Normally a promotion like this should be labeled shameless, but it’s too hilarious to criticize. Would Colonel Sanders have ever thought that he’d someday be whacking aliens with his cane in an RPG when he founded KFC in 1930? Absolutely incredible.