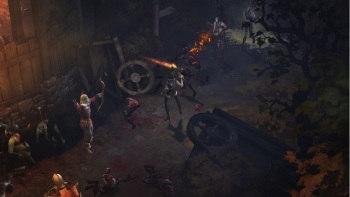 With its auction house, microtransactions and awlays-online requirement, it doesn’t seem surprising that Diablo III started life as an MMO.

At least, according to Blizzard North co-founder Max Schaefer.

“When I was working at Blizzard a million years ago we were working on Diablo III and it was an MMO,” he told The Verge. “We were going to do the Diablo version of World of Warcraft. Blizzard obviously changed that pretty quickly, so we left to start Flagship Studios and we brought in a lot of the guys, so they rebooted with their own team.”

Now we’re talking ancient history here. Schaefer left Blizzard North, taking a sizable chunk of Blizzard talent with him, to form Flagship Studios back in 2003. The Studio only managed to release one game, the ill-fated Hellgate: London, before it went under. Schaefer’s next start-up, Runic Games, found success with its likable Diablo II knock-off, Torchlight.

Schaefer went on to add that he doesn’t think competition with Diablo III will do the upcoming Torchlight II any harm. In fact, he pointed out that the rate of Steam pre-orders for the game has risen by 40% since Diablo III’s release.

“We’re kind of piggybacking on their marketing,” he added.