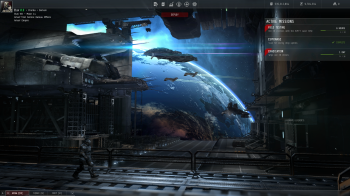 Taking the lessons learned from Dust 514, CCP aims to broaden the scope of their sandbox FPS.

During the Dust 514 keynote at this year’s Fanfest, Jean-Charles Gaudechon, Executive Producer on Dust 514, spoke of what’s occurred in the game since it launched almost to date one year ago. He praised the community, which constantly surpassed their expectations. For instance, when planetary conquest was first enabled the devs figured it would take at least a few days for everything to be claimed, it took the players 22 minutes. To date, over 300 million folks have died in game and nearly 7 trillion isk, the in-game currency, worth of items have been destroyed.

Over the past year the developers at CCP Shanghai have been steadily pushing out updates for Dust 514, on nearly a monthly basis, but they have also been working on something in secret that was unveiled to the public for the first time today. Project Legion, a working title, is “more than just a port”, as one developer put it, of Dust 514 to the PC. They wanted to take the lessons learned on Dust 514 and continued to expand the central pillars of multiplayer at the core, emergent gameplay, player-driven economy and with it set more firmly in new eden.

During a brief demo, we got the chance to see Project Legion in action on stage after the developers pulled back some cleverly concealing wall sections to reveal a pack of PCs. Beginning at your quarters, the home screen featured a much more dynamic and open background, much more akin to the hangers in EVE Online. They briefly explained that from here you’ll scour the galaxy for missions, both PVE and PVP, and depending on how far out from the central planets you are determines your risk from other players. If CCP can manage to marry the gameplay of Dust 514 with more emergent elements akin to games like DayZ there’s the potential for some really interesting gameplay there, especially if it’s still all integrated in the larger EVE universe.

Spawning into a level, the developers mostly showed off the increased graphical fidelity that the PC allowed for with plenty of dynamic lighting, improved textures and new effects. The game itself still looked and felt much like Dust 514 though. I actually enjoyed my time with Dust 514, feeling like it had some high ambitions that didn’t pan out. I even went through the trouble of connecting mouse and keyboard to the PS3, so I’m certainly looking forward to getting to play it on PC.

CCP is looking for feeback based on what they showed, with more details on Project Legion to come later.

The Accuracy Trap in the Marvel Cinematic Universe