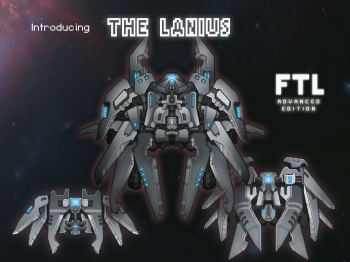 The Lanius are metallic lifeforms that don’t require oxygen to survive.

Earlier in the year, Faster Than Light developer Subset Games announced it was working on an “advanced edition” of the game, that will be available as a free update. Now, they have announced that among previously revealed features, the advanced edition will feature a new alien race, the Lanius, as well as a Lanius ship.

“The Lanius are scavengers – metallic lifeforms that rely on the absorption of minerals to sustain themselves. Their society ebbs and flows in hibernation cycles; they may lie dormant for many years, even while hurtling through space. As soon as they become aware of significant metal deposits they reawaken. Usually this occurs in the dying stages of a galactic civilization or in the wake of intergalactic war.”

The Lanius don’t require oxygen to survive, and will actually passively drain any room they inhabit of oxygen. This should make for some interesting boarding strategies, although they may cause trouble if you have any non-Lanius crew members on your own ship!

The team also revealed a few more new features for the Advanced edition, that will be available as a free patch for current owners of the game:

The Advanced Edition of Faster Than Light is due out in “early 2014”.

Report: Steam Allows Publishers To Crack Down On Cross-Region Gifting