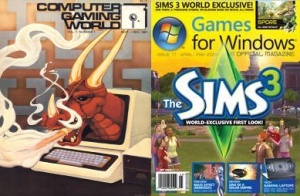 The end of an era is upon us, as Ziff Davis has announced that Games For Windows: The Official Magazine will no longer be published in print form.

In a blog post on 1Up, Ziff Davis Vice President Simon Cox said the closure “has nothing to do with the Chapter 11 stuff,” but added, “Both the eyeballs of PC gamers, and the essential advertising dollars needed to sustain a PC gaming magazine are moving online at an alarming pace. Much faster, it seems, than in the console world. Fast enough that we realized – and Microsoft agreed – that it was time to put the GFW team’s efforts where the most people could see the results: Online.”

Cox said the current editorial staff at GFW Magazine will be retained and transitioned to PC coverage on the 1Up site, but the art team of Michael Jennings and Rosemary Pinkham “will be leaving us.” Gamers who have a subscription to the magazine will be able to transfer it to either Electronic Gaming Monthly or PC Magazine.

Games For Windows Magazine was originally launched in 1981 as Computer Gaming World, a bi-monthly newsletter that often featured submissions by noteworthy game designers. The magazine grew into a full-scale monthly publication in 1988, adding columns and reviews by several well-known writers. Founder and publisher Russell Sipe sold the magazine to Ziff Davis in 1993, and the magazine’s growth continued through the 90s, including a 500-page issue released for Christmas 1997. In August 2006, Ziff Davis and Microsoft announced the magazine would be relabeled as Games For Windows: The Official Magazine, in support of Microsoft’s Games for Windows initiative.