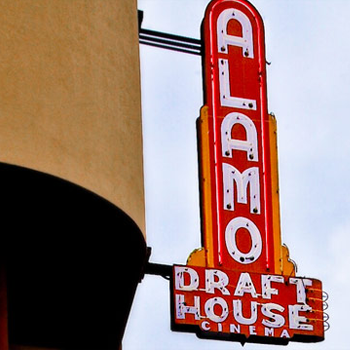 Google Glass has been the subject of controversy since the technology debuted, pitting the percieved rights of some to not be filmmed without consent against the percieved rights of others to walk around with a camera strapped to their face. Now, the Alamo Drafthouse movie theater chain has joined the list of private businesses that have decided to not allow the devices on their premises; though in this case for reasons relating to the potential use of Glass technology for movie piracy.

Often refered to only as “Glass,” Google Glass is a wearable computer built around an Optical Head-Mounted Display technology. Though not yet widely adopted, institutions with existing bans on recording devices of any kind (like casinos) moved to ban Glass almost immediately. Seperate controversies concerning the use of Glass in spaces like restaurants, mass-transit and restrooms have followed, along with concerns over whether it would be legal to use in countries with especially strict anti-spying laws.

Founded in 1997 in Austin Texas (with more recent expansions throughout the state and now nationwide) by Tim and Karrie League, The Alamo Drafthouse theater chain is highly regarded by devoted film fans for its commitment to inventive programming, popular events like Fantastic Fest and Butt-Numb-A-Thon, trendsetting in-theater food/drink service and association with prominent web-based film journalists like Harry Knowles and Devin Faraci.

Its greatest claim to fame (and cinephiles’ hearts), though, comes from its stringent in-theater etiquette policy: Talking, texting and phone use are banned outright, and violators can be removed from the premises – even if they happen to be Madonna. Children under the age of six and unaccompanied minors are also prohibited.

Drafthouse CEO Tim League stated that the ban has been under consideration for “over a year,” and enforcement would be conducted on a case by case basis with regard to those using Glass as their primary eyewear. Google has not issued a statement regarding the ban at this time.