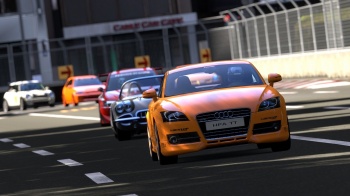 After years in development and several delays, Sony has finally pinned down a release date for racing simulator Gran Turismo 5. What’s more, the date is not only this year, it’s this month, as the game will apparently be in stores on November 24th.

In a statement on the PlayStation Blog, Yamauchi apologized for making Gran Turismo fans wait for so long, but said that meeting, or even surpassing, their expectations had been Polyphony’s number one priority. He compared it to the Apollo Space Program – which put the first men on the moon in 1969 – in terms of the complexity of the project and the number of challenges along the way. When the first GT came out, Yamauchi said, the goal was to set a “new precedent” for the racing games, and with the extra power of the PS3, he wanted to outdo all Polyphony’s previous efforts and create another “great revolution” for the genre. He hoped that the game would not disappoint the people who had been waiting so long for it.

When the “concrete” release date for Gran Turismo 5 turned out to be more of a guideline, sources suggested that seeing the game this year was unlikely. Sony countered that rumor earlier this month by saying that the GT5 disks were in the process of being stamped and would be ready for release later this year. Obviously we’ve seen Gran Turismo miss more than one release date, but provided no unseen calamities happen between now and the 24th, this looks like it’s finally the real deal.

Film This Chick Stuff! Part One: A Call for Aid