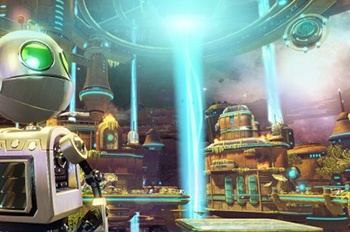 For the past 16 years, Insomniac Games has developed exclusively for Sony platforms with games like Resistance and Ratchet & Clank. That’s all about to change.

Insomniac has signed a deal with EA Partners – you know, the same program that Infinity Ward has Respawned at – to create a new franchise for both PS3 and Xbox 360. This marks a fairly significant departure for Insomniac, which has developed exclusively on Sony platforms since the release of Disruptor on the original PlayStation in 1996.

No title or release window have been announced for this new franchise, but it is currently in development at the developer’s Burbank location (and sadly, not just down the road here at the Durham, North Carolina office). “Working with EA Partners allows us to extend the reach of our games to a multiplatform audience while retaining ownership of the intellectual property,” said Insomniac CEO Ted Price.

“We are excited and eager to introduce Insomniac to a new group of gamers while reinforcing to our loyal fans what makes our games special.”

While Insomniac – makers of big-name Sony franchises like Spyro the Dragon (the good ones), Ratchet & Clank, and Resistance – says it has been wanting to expand to Xbox “for many years,” a blog post from Price reassured its PlayStation fans that the studio’s ties to Sony were still strong:

“We know many of you are extremely loyal to the PlayStation family, and especially to Resistance and Ratchet & Clank. We are too. Our relationship with Sony Computer Entertainment is still very strong, and continues as we develop additional projects exclusively for PlayStation 3 – projects that will take full advantage of our additional development time.”

So no, it doesn’t look like you Xbox 360 owners will be getting the new Ratchet & Clank games that you secretly covet – you do, admit it – but instead something completely new from the talented studio. Which is great! Multiplatform releases for all!

EA Plans to Try Good Games Instead of Good Ads