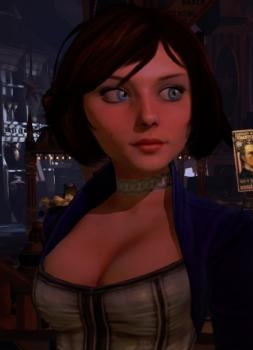 Much like its predecessors, BioShock Infinite promises a richly bizarre alternate-history setting packed with fascinating characters struggling to survive in a meltdown of philosophical extremism. There’s also at least one pair of really great cans, belonging to the heroine Elizabeth – the Little Sister, all grown up. Despite being the man more or less responsible for Elizabeth and her fantastic sweater puppies, Levine says he hasn’t put a whole lot of thought into the matter and he wishes the rest of the internet was a little less hung up on them. It. Whatever.

“In terms of her body type, I think certainly people on the Internet have spent way more time thinking about Elizabeth’s chest than I have. It’s something I’ve barely thought about,” he said in an interview in the latest issue of Official Xbox Magazine.

“It’s disappointing when [Elizabeth’s chest] becomes a focus for conversation because that was never my intent and it’s sort of a disincentive – I’d much rather talk about what she’s going through as a person, but whatever, they have the right to shout out whatever they want,” he continued, suggesting that he’s thought about it a lot more than he’s letting on. Furthermore… hey. Hey! My eyes are up here, jerkwad.

“To me, the most important thing with Elizabeth was just honestly her eyes because, you know, they’re somewhat exaggerated and the reason for that is because there’s so much expression you can do there, with her eyes, and you see her often at a great distance,” he said. “I’ve spent way more time thinking about her eyes than her chest because eyes show a ton of expression, and you see her at a great distance. AI characters get very, very small, very, very quickly so you need to be able to recognize her silhouette, the shape of her body. Her color scheme’s actually very simple, you know, the sort of two tone colour look – that’s all to do with this sort of exaggeration.”

And disappointing though it may be for some of you, those fabulous big daddies may yet be toned down for the final release. Levine said that as the creative process evolves, Elizabeth herself may undergo a few changes as well. “I haven’t made the definitive statement on it,” he said. “I certainly don’t spend as much time thinking about this issue as the internet does, and I’m not sure what that says about the internet but, you know.”

Oh yeah. We know. BioShock Infinite is currently slated to come out later this year for the Xbox 360, PlayStation 3 and PC.