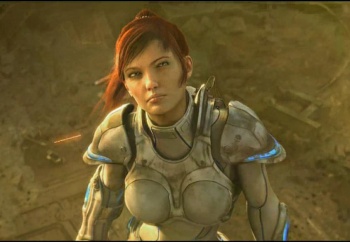 Activision CEO Bobby Kotick has laid out plans to package the in-game cinematics from games like StarCraft and sell them as movies.

Cinematics are of such high quality today, especially those created by developers like Blizzard in the recent StarCraft II, that Activision CEO Bobby Kotick thinks they should become more than pieces of a game. If gamers are spending an hour watching these computer-generated scenes while playing, why not remove them from the game and charge for viewing privileges?

That’s exactly what Kotick plans to do at Activision within the next five years. At the Bank of America Merrill Lynch Media, Communications & Entertainment Conference this week he detailed his plans to monetize cutscenes that can be sold as movies.

Speaking about these cutscenes, Kotick said: “If we were to take that hour, or hour and a half, take it out of the game, and we were to go to our audiences for whom we have their credit card information as well as a direct relationship and ask, ‘Would you like to have the StarCraft movie?’, my guess is that … you’d have the biggest opening weekend of any film ever.”

He guesses that such a product could be priced at around $20 to $30, but any pricing at this point is pure speculation. “Within the next five years, you are likely to see us do that,” he added. These “movies” would be distributed online directly to consumers from Activision.

Kotick calls the people that would purchase such a product “enthusiast consumers,” because they’re willing to watch cinematics again even though they might have already beaten a copy of the game they’re from. This really isn’t all that new of an idea, aside from the digital distribution aspect of it, as Blizzard released a cutscene collection on DVD called the Blizzard Collection in 2002 long before Kotick was associated with the developer.

That price range seems really high, considering that an entire game costs $50 or $60, but this is a business that would likely provide extra revenue to any company that has fans on the level of World of Warcraft and StarCraft. It’s not like gamers would have to buy these scenes if they didn’t want to, but rest assured, plenty would.