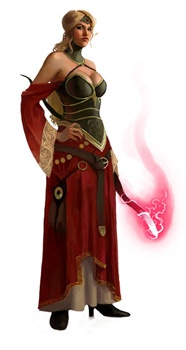 Apparently, Dragon Age: Origins‘ stilted and awkward pixelated sex was what BioWare was shooting for.

Through interactions with characters in your party, as well as prostitutes, it is currently possible to initiate animated sex scenes in Dragon Age: Origins. During these animations, however, the characters are wearing underwear. In an interview with videogamer.com, BioWare co-founder and CEO Dr. Ray Muzyka claimed that it was the design team’s decision to have no nudity during the sex scenes in Dragon Age: Origins.

“It’s an artistic choice by the development team,” explained Muzyka, who is also the company’s cofounder and producer of the classic Baldur’s Gate series. “We don’t constrain what they do. We don’t strive for gratuitous content. But we also ask the teams to choose a direction and then run with it. That was their choice. That’s how they wanted to depict the romantic liaisons in the game, so that’s what we did.”

It is good to know that the decision wasn’t handed down from Electronic Arts HQ, and that the designers made the call on their own. In some ways, I agree with the no nudity policy in Dragon Age because it’s an RPG and not a cheesy sex simulator. If I wanted that, I would play Leisure Suit Larry.

But if you are going to add the ability to have sex in your role playing game, it needs to feel real and not break immersion. By all accounts, BioWare failed at this in DA:O. I personally haven’t gotten to partake in any of the fun of these scenes during my playthrough. But the videos I’ve seen online do seem to hint at intimacy, with quick edits and low lighting, rather than hardcore sex, which is good. But the weird movements of the animated figures and the fact that their bodies are fully lit, with underwear clearly visible, is a bit laughable.

For my money, game designers at a prestigious company like BioWare should look towards cinema for hints on how to show sex without being too dirty. The low lighting was a good start, but it should look like the tent sex scene in Dances With Wolves between Lt. Dunbar and Stands With A Fist and not like two adults rolling around in their underwear by the fire.